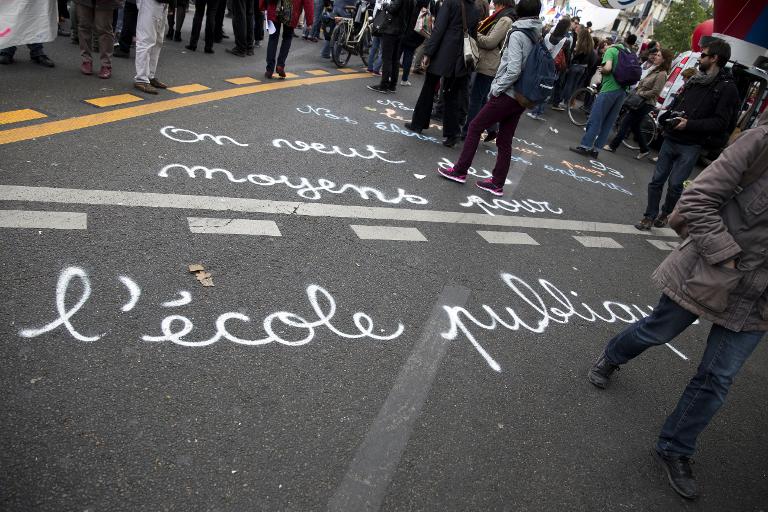 Teachers in France went on strike Tuesday to protest against a proposed reform of secondary education that has become a bitter battleground for one of the country’s rising political stars.

Education Minister Najat Vallaud-Belkacem, 37, has come under fire for the disputed changes, which concern schools for children aged between 11 and 15.

Among the most disputed elements of the reforms is a proposal to reduce the teaching of Latin and Ancient Greek, replacing these languages with a general class on classical culture.

Teachers are also furious at plans to give schools more autonomy in a system that has previously sought to ensure that all children at high school level receive exactly the same education.

Despite this attempt at egalitarianism, there are wide differences between schools in poorer areas and those in more prosperous parts of the country.

The high school drop-out rate among children of manual labourers is 32 percent whereas only five percent of children from white collar families drop out of school prematurely.

And the French education system has slipped down the rankings drawn up by the Organisation for Economic Cooperation and Development (OECD), which says it is one of the least egalitarian in the world.

The reforms aim to even up this balance but critics say it will result in a race to the bottom.

According to the SNES union that organised the industrial action, more than half of high school teachers were on strike whereas the ministry said only 27 percent had walked off the job.

“There is still time… to take up discussions again and to stop what looks like being a serious waste for young people, for our profession,” said the SNES.

Tuesday’s strike called by unions opposed to the reforms is seen as a first major test for Vallaud-Belkacem, a rising star in the ruling Socialist party and a minister at only 37.

She has come under huge political pressure over the reforms, notably from opposition leader and former president Nicolas Sarkozy who said she was involved in a “fight to see who was most mediocre” with Justice Minister Christiane Taubira.

Sarkozy was accused in some quarters of xenophobia for attacking these two ministers — Vallaud-Belkacem has Moroccan roots and Taubira is French Guianese.

However, she has received staunch support from President Francois Hollande and Prime Minister Manuel Valls who has vowed to back his close ally to the hilt.

“There are questions, they are legitimate. But there is a reform which must assure success for all… and excellence,” Hollande said on a visit to Berlin.

A combative Valls said the reform was “essential”, adding he wanted to pay “special tribute” to the teachers in France. “This reform is also for them, for their work,” he stressed.

“I am confident. This reform will be put in place as it was originally drawn up and the legislation will be tabled as soon as possible,” Valls added.

Vallaud-Belkacem herself said: “I want to say clearly to all those who went on strike and all those who did not… that I am listening to you and I am there to ease your concerns.”

Nevertheless, in France as in many Western countries, education policy raises huge passions and the debate promises to continue to rage.

Proof that education is a potentially explosive issue in France is that two of the 10 biggest post-war strikes in the country have been over education, in 1984 and 1986.

Sarkozy’s right-wing opposition UMP party has called for the reform to be scrapped entirely.