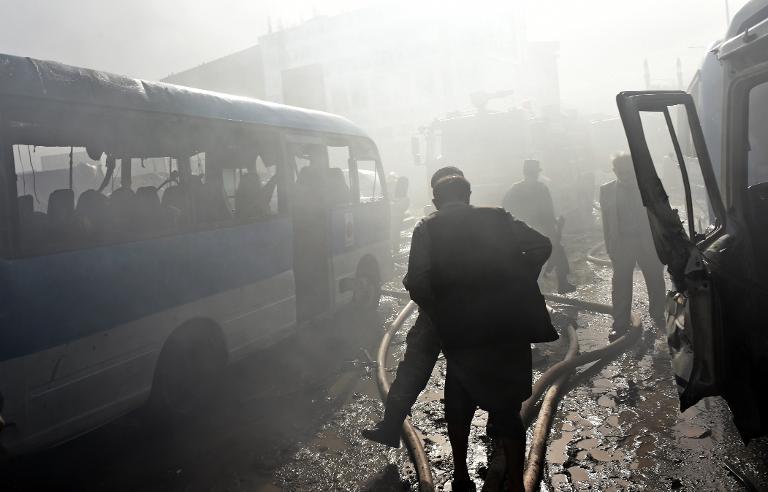 A Taliban car bomber ripped through the parking lot of the justice ministry in Kabul Tuesday, killing four people and wounding dozens of others in the latest in a string of attacks to shake the Afghan capital.

The powerful suicide blast, which occurred as government employees were leaving work, comes as the insurgents step up attacks on government and foreign targets in the midst of their traditional summer offensive.

“We can confirm that at least four people have been killed and a further 24 have been wounded.”

A thick plume of smoke rose over the city after the powerful explosion struck during evening rush hour, which left the parking lot littered with mangled and charred wrecks of dozens of vehicles.

The area was cordoned off by security officials as yellow-helmeted firefighters doused the smouldering scene of the explosion.

Deputy Interior Minister Mohammad Ayoub Salangi said four men and one woman had been killed, adding that it was impossible to say whether one of them was the suicide bomber.

“The body of one of the victims was torn into pieces and we cannot verify if he was the suicide attacker,” Salangi told AFP.

The health ministry said at least 53 people had been brought to various Kabul hospitals.

“We are getting more every minute,” ministry spokesman Mohammad Ismail Kawoosi told AFP.

Tuesday’s blast is the latest in a spate of attacks targeting legal authorities in Afghanistan, who the insurgents accuse of mistreating Taliban inmates.

“The stooge Kabul administration, its stooge intelligence, prison officials, prosecutors and court officials use force and mistreat (Taliban) prisoners,” Taliban spokesman Zabiullah Mujahid said in a statement that claimed responsibility for the attack.

“Therefore the prosecutors, judges and the employees of justice ministry have been repeatedly the target of our attacks.”

Tuesday’s bombing was the third recent deadly attack to jolt the Afghan capital.

A British security contractor and two teenage girls were killed Sunday when a Taliban insurgent rammed an explosives-laden car into a European Union police vehicle in Kabul.

At least 18 people were wounded in the assault, which came three days after 14 people — mostly foreigners — were killed in a Taliban attack on a Kabul guest house that trapped dozens attending a concert.

Official efforts to bring the Taliban, who have waged a 13-year war to topple the US-backed government, to the negotiating table have so far borne little fruit.

The surge in attacks has taken a heavy toll on civilians, according to the United Nations Assistance Mission in Afghanistan.

In the first four months of 2015, civilian casualties jumped 16 percent over the same period last year, it said.