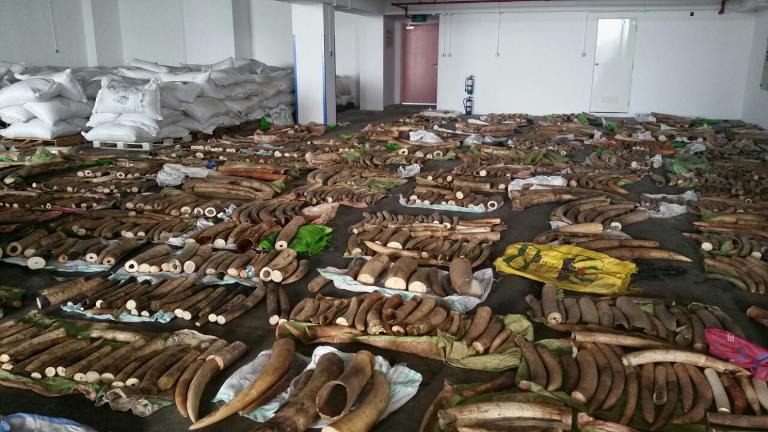 Singapore authorities seized the biggest illegal shipment of ivory and other exotic animal parts in more than a decade Tuesday, with the haul from Kenya worth an estimated Sg$8 million ($6 million).

The animal parts were discovered stashed among bags of tea leaves in two 20-foot containers while transiting through the city-state to Vietnam, the Agri-Food and Veterinary Authority (AVA) and Singapore Customs said in a joint statement.

Four pieces of rhino horn and 22 teeth believed to be from African big cats — cheetahs and leopards — were also found in the containers, it said.

The haul weighed 3.7 tonnes and is the largest seizure of illegal ivory in Singapore since 2002 when six tonnes of ivory were intercepted, the statement said.

The shipping of ivory has been banned since 1989 under the Convention on International Trade in Endangered Species of Wild Fauna and Flora (CITES) — to which Singapore, a major hub for seaborne trade, is a signatory.

In April last year, local authorities intercepted a shipment of illegal ivory worth Sg$2.0 million, labelled as coffee berries, transiting from Africa, according to the statement.

A similar cargo, also from Africa, worth Sg$2.5 million was uncovered in January 2013.

Ivory ornaments are coveted in Asian countries like Vietnam, Thailand and China despite fears that the trade is pushing wild elephants to extinction.

Rhino horn is prized for its supposed medicinal properties.