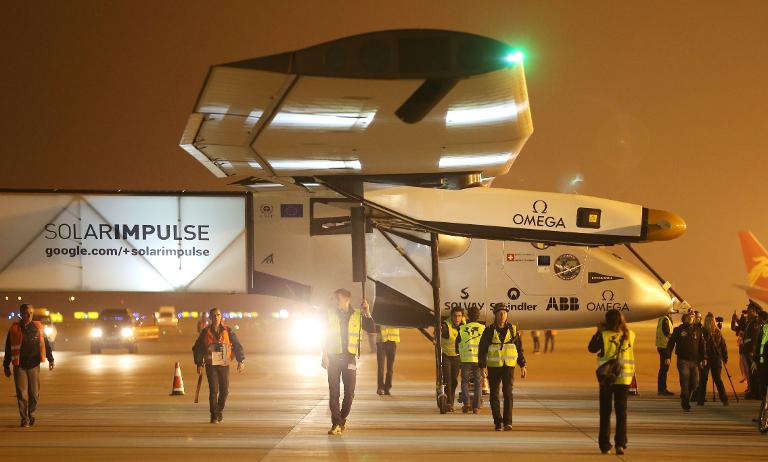 Strapped into a seat in a tiny one-man cabin, Swiss pilot Andre Borschberg will have to endure extraordinary conditions as he flies over the Pacific Ocean for five days and nights, powered only by the sun.

Each day he will experience altitudes of 28,000 feet, akin to the world’s highest peak, and temperature changes of 55 degrees C (almost 100 F) in the unpressurised, unheated Solar Impulse 2 cockpit.

At the same time he will only be able to catch the shortest of naps — his seat doubles as a bed — on the 8,500 kilometre (5,270 mile) journey from Nanjing in China to Hawaii, given the need to check the autopilot.

“How can I live five days in this tiny environment, going up Everest every day, having winter and summer every day because of the changing temperature, resting only 20 minutes at a time?” Borschberg asked.

“It’s a great opportunity to discover myself,” he said.

Borschberg — who is taking on the challenge at the age of 62 — will not resort to caffeine as personal fuel.

The journey, which is awaiting suitable weather conditions, is set to be the longest and most difficult leg of a 12-stage attempt to complete an unprecedented flight around the world using only solar power, promoting a message of a clean energy future. It began in Abu Dhabi in March and has featured two stops in China, the world’s biggest polluter.

But failure could mean a parachute descent into the ocean hundreds of kilometres from rescue.

No ship will trail the plane as it is far too fast for a maritime vessel to keep up with, even though its maximum speed of 140 kilometres (87 miles) an hour is much slower than conventional jet aircraft.

Even so, with an engineer’s detachment, Borschberg declines to contemplate his own mortality.

“I don’t see it (as) risky, in the sense that we worked a long time on all these different questions,” he said.

“In the worst case, we have a parachute, we have a life raft and we know how to use it. Of course, hoping that we will not need to do that.”

The wings of Solar Impulse, longer than those of a Boeing 747, are covered with solar cells which generate electricity to propel the plane and charge lithium batteries so its four engines can operate in darkness.

In advance of the Pacific flight, the crew stripped off two side wheels and internal brakes from the propellers to make the fragile-looking craft — already just 2.3 tonnes, the weight of a large SUV — as light as possible.

Bertrand Piccard, who has flown the Solar Impulse on other stages of the voyage — and who achieved the first non-stop round-the-world balloon flight in 1999 — said meteorological conditions were among the biggest challenges for the Pacific flight.

“If you enter into bad weather, you might not have enough energy for the night,” he told AFP by video link.

“Of course, the other challenge for the pilot is resting time. If the autopilot fails, or you have too much turbulence and you have to fly manually, then it’s going to be extremely difficult,” said Piccard, who will take on the next leg from Hawaii to the US city of Phoenix.

Borschberg, an entrepreneur with 23 years’ experience as a pilot in the Swiss air force reserve, will breathe through an oxygen mask at high altitudes and eat specially prepared meals, including cereals, risotto and vegetable soup in self-heating packaging. A toilet is built into the pilot’s seat.

To relieve the physical stress on his 1.90-metre (6ft 4in) frame and the drain of the endless hours on his mind, he plans to practise yoga.

“Yoga can be extremely helpful in this cockpit,” he said.

But one element defies advance preparation.