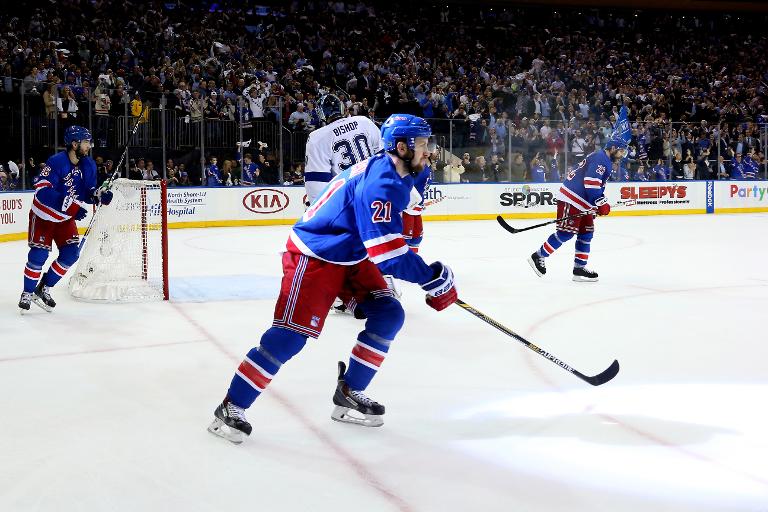 Tyler Johnson scored a hat-trick as the Tampa Bay Lightning routed the New York Rangers 6-2 to even their NHL semi-final playoff series at 1-1.

Johnson, who leads the league in playoff goal scoring and points, scored a short-handed goal, a power-play goal and an even-strength goal for the first playoff hat-trick in Lightning franchise history.

The 24-year-old American now has 11 postseason goals and also leads all players in playoff points with 16.

“I am living my dream,” said Johnson, who helped the United States win a gold medal at the 2010 World Junior Hockey Championships.

Johnson went undrafted as an 18-year-old in the NHL entry draft because of his smaller size. He played four seasons of junior hockey with the Spokane Chiefs of the Western Hockey League.

“He is not a big guy, but he’s not afraid to go anywhere and gets rewarded for that,” Lightning forward Steven Stamkos said of Johnson.

Goaltender Ben Bishop was once again brilliant in net making 35 saves for Tampa, rebounding from a 2-1 loss in the opening game of the Eastern Conference series which will send the winner to the Stanley Cup finals.

“This was a big test for us and we answered the bell,” Stamkos said. “We played a lot better as a team.

“This was a strange game. It seemed like we were either on the power play or killing a penalty. We won the special teams battle tonight.”

Chris Kreider and Derek Stepan scored power-play goals for the Rangers, who outshot the Lightning 37-26.

Swedish goaltender Henrik Lundqvist allowed all six Tampa Bay goals. Lundqvist and the Rangers will get a chance to regain home-ice advantage when the series shifts to Florida for game three on Wednesday.

“We got caught taking too many penalties,” said Rangers forward Martin St. Louis.

“They capitalized and separated themselves from us. They are making better plays.”