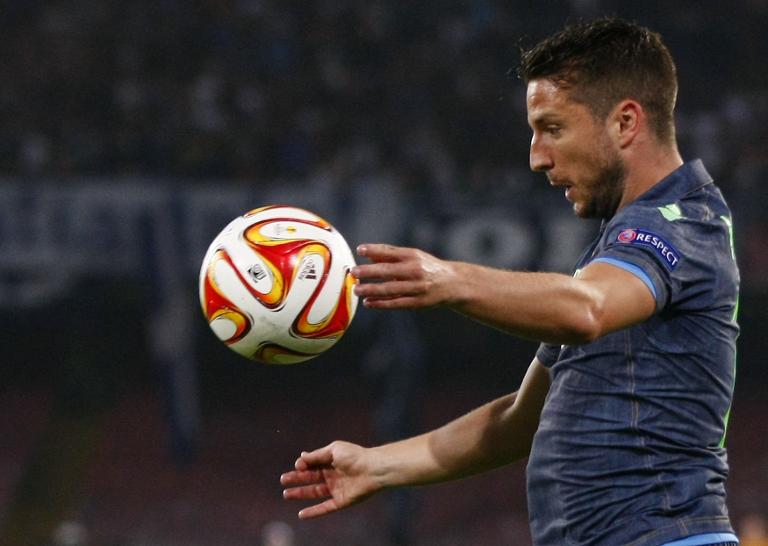 A brace by Belgian international Dries Mertens helped Napoli to an unconvincing 3-2 win over relegated Cesena but still saw them close to within three points of Lazio and remain in the hunt for a Champions League spot on Monday.

Napoli surprisingly went behind on the quarter-hour when Frenchman Gregoire Defrel beat ‘keeper Mariano Andujar to score the first of a brace of goals at the San Paolo.

But the hosts replied in style, Mertens levelling from close range following a defensive mix-up and Manolo Gabbiadini pulling the hosts in front only two minutes later.

Napoli’s enterprise in attack, however, was not matched in defence and in the dying seconds of the opening half Defrel was left unmarked to fire home his second after a cutback from the right wing that went through Mertens’ legs and evaded the entire Napoli defence.

Cesena coach Domenico Di Carlo suggested Defrel is unlikely to remain long with the club, already relegated to Serie B.

“He can play anywhere up front and he still has plenty of room for improvement. With us, he’s improved a lot, but now he’s ready for a bigger club.”

The hosts lifted their game after the break and should have pulled in front only for Mertens to flash an angled drive just wide of Federico Agliardi’s far post.

Mertens made amends soon after, forcing his way down the left flank, cutting inside and playing a one-two with Jose Callejon to bundle past Agliardi for what proved to be the match-winner.

The result keeps Napoli still in the hunt for a Champions League place with Lazio just three points above them in third — which gets them a place in the qualifying rounds for Europe’s premier club competition.

With two games remaining this season, Napoli will be hoping Roma — who sit one point ahead of Lazio — will do them a favour by beating their city rivals next Monday.

However before then, Napoli will need to dig deep with a trip to face champions Juventus this Saturday where defeat would leave Lazio requiring just a draw from their derby match to take third spot.

Earlier on Monday, Fiorentina coach Vincenzo Montella revealed he could leave the club in the summer if negotiations with owner and president Andrea Della Valle over its future direction do not bear fruit.

Beaten semi-finalists Fiorentina took a major step towards a place in next season’s Europa League with a 3-0 rout of relegated Parma to reclaim fifth spot.

But Montella, who has been linked with several clubs in Italy’s top flight including struggling AC Milan, hinted he could be tempted away from the Artemio Franchi stadium.

“I want us to finish in fifth place and finish off the journey we took together three years ago, the lads deserve it,” Montella told Sky Sport after his side’s 3-0 rout of relegated Parma.

“Then, the president and I will sit down and find out if we have the right things in place to continue together,” added the 40-year-old.

Montella’s men were ousted from the Europa League 5-0 on aggregate last week by defending titleholders Sevilla.

But La Viola have their sights firmly fixed on another tilt at Europe’s second tier club competition next season after goals from Gonzalo Rodriguez, Alberto Gilardino and Mohamed Salah helped the Florence-based side reclaim fifth place from Genoa.

Fiorentina sit 23 points behind champions Juventus, who face Lazio in the Italian Cup final on Wednesday and then play Barcelona in the Champions League final in Berlin on June 6.