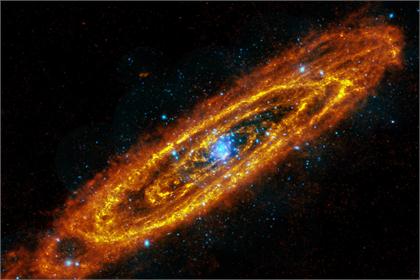 The dark, nearly invisible halo stretches about a million light-years from its host galaxy, halfway to our own Milky Way galaxy. This finding promises to tell astronomers more about the evolution and structure of majestic giant spirals, one of the most common types of galaxies in the universe.

Lead investigator, Nicolas Lehner of the University of Notre Dame explained that halos are the gaseous atmospheres of galaxies. The properties of these gaseous halos control the rate at which stars form in galaxies according to models of galaxy formation.

The gargantuan halo is estimated to contain half the mass of the stars in the Andromeda galaxy itself, in the form of a hot, diffuse gas. If it could be viewed with the naked eye, the halo would be 100 times the diameter of the full Moon in the sky. This is equivalent to the patch of sky covered by two basketballs held at arm’s length.

The Andromeda galaxy lies 2.5 million light-years away and looks like a faint spindle, about 6 times the diameter of the full Moon. It is considered a near-twin to the Milky Way galaxy.