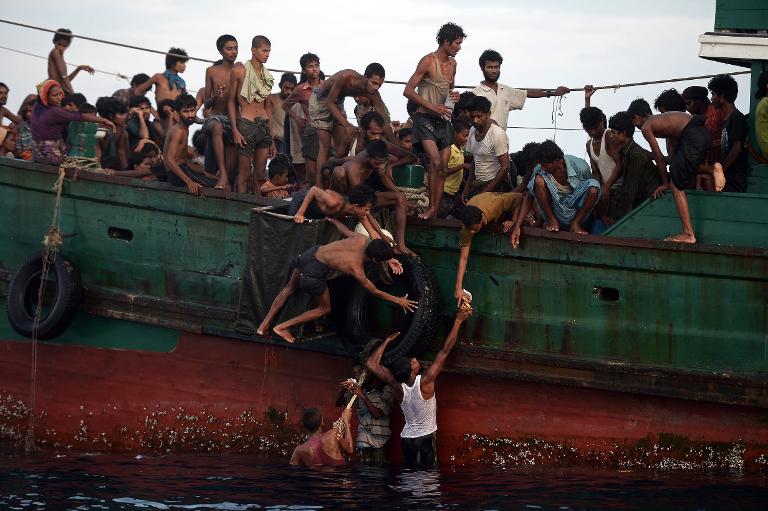 Myanmar Monday acknowledged international “concerns” about waves of boatpeople, many of whom are fleeing from persecution, but denied it is solely to blame as thousands languish in dire straits at sea.

The comments came as fresh details emerged from migrants of brutal fighting with metal bars and knives that left at least 100 dead as food and water dwindled on their rickety vessel as it drifted in Indonesian waters.

Southeast Asia is gripped by an escalating migrant boat crisis that has seen nearly 3,000 migrants swim to shore or be rescued off Indonesia, Malaysia and Thailand over the past week.

Others have been turned back to sea, sparking international outrage and fears that time is running out to rescue thousands still believed to be trapped with scarce supplies on the unwanted boats.

Tens of thousands of Rohingya Muslims, a minority who face daily prejudice and a raft of restrictions in western Myanmar, have long fled in barely sea-worthy boats across the Bay of Bengal.

In recent years they have been joined by growing numbers of economic migrants from neighbouring Bangladesh looking to escape grinding poverty.

Myanmar’s part in the grim and often deadly exodus had been largely ignored by its neighbours.

But the former army-run nation has faced growing international pressure this month after thousands of migrants were abandoned in overcrowded boats by people smugglers following a crackdown on the trade in Thailand, a key transit point.

Myanmar Information Minister Ye Htut said his country understood “the concerns (of) the international community on the people in the sea”.

“Instead of blaming Myanmar for all these problems… all these issues should be solved by the regional partners,” he added in English following a briefing between government officials and diplomats in Yangon.

Myanmar has yet to confirm whether it will attend a regional summit called by Thailand for May 29.

Myanmar does not recognise the estimated 1.3 million Rohingya as an official minority, instead viewing them as mostly illegal immigrants from Bangladesh.

But in strikingly bold comments a spokesman for Aung San Suu Kyi’s opposition party said that minority Muslims were “entitled to human rights”.

“If they are not accepted (as citizens), they cannot just be sent onto rivers. Can’t be pushed out to sea. They are humans. I just see them as humans who are entitled to human rights,” Nyan Win, spokesman for the National League for Democracy said.

Suu Kyi has previously faced criticism for not speaking strongly on the Rohingya’s plight as doing so could alienate her more strident Buddhist voters ahead of crunch polls later this year.

Grim tales have emerged of deadly fights between migrants on board boats washing into Indonesian waters in recent days.

Some described a vicious brawl breaking out as desperation exploded into bloodshed on their sinking boat, which was discovered off Aceh, on the Indonesian island of Sumatra on Friday.

“Suddenly the Bangladeshis came out of the deck, and they attacked all of us who were on the top of the boat,” said Rohingya migrant Hasina Begun.

“Those who wanted to save their lives, had to jump in the sea, but my brother could not. When they found him, they beat him and then they slaughtered him. After that they threw him into the sea,” the 22-year-old told AFP.

Bangladeshi migrants, who are now being kept separately from the Rohingya in an Indonesian shelter, claim that they were kept below deck by Myanmar people smugglers, who denied them food and water.

Those interviewed put the number of dead between 100-200 from a boat carrying around 1,000 but precise figures are difficult to obtain.

The horrific testimony will do little to allay fears for those still stuck on vessels in the Andaman Sea, currently being bounced between countries in what rights groups have described as “human ping-pong”.

The Indonesian navy said it had stopped a boat believed to be carrying migrants from entering its waters Sunday after the vessel was spotted heading across the Malacca Strait from the direction of Malaysia.

In Bangladesh local coastguard rescued seven nationals who said they were thrown off a Thai fishing trawler packed with migrants.

Roland Kobia, European Union Ambassador to Myanmar, said most nations have urged swift regional dialogue as a way of tackling the boat crisis in talks with Myanmar officials Monday.

“These people can’t wait too long,” he said.