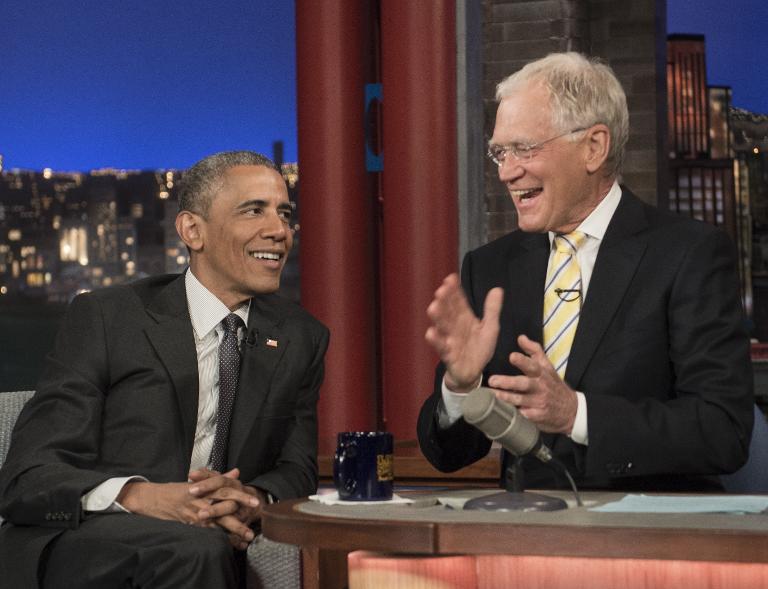 The longest-serving nighttime talk show host in US TV with more than 6,000 shows to his name, 68-year-old Letterman has been honored with tributes in US media, and by a host of celebrities.

Tom Hanks and the musician Eddie Vedder are scheduled Monday; followed by Bill Murray and Bob Dylan on Tuesday before the grand finale on Wednesday.

“I’m naked and afraid,” Letterman told CBS Sunday, half seriously, half joking. “Any enormous uprooting change in my life has petrified me,” he said. But once through the other side “the reward has been unimaginable.”

Letterman got his first comedy show on NBC in 1982, before defecting to CBS in 1993 to host the “Late Show” after the biggest career disappointment of his career — losing out to Jay Leno as host of the “Tonight” show.

His “Late Show,” which airs at 11:35pm every weeknight, is a unique blend of comedy, news monologue, celebrity interviews and oddball comedy.

Sarcastic, at times angry and scathing, Letterman is noted for an unpredictable, uncompromising attitude. Some celebrities admit they feared him, and the fact they could end up in his crosshairs.

Yet Letterman has been nominated for 67 Emmy awards — the most highly prized accolade in American television — and was nominated every year from 1984 to 2009.

He won 12 and features on lists of the most popular people in American television history.

After the horror of the September 11, 2001 attacks on the United States, Letterman was the first comedian to go back on air — six days after the Al-Qaeda hijackings that killed around 3,000 people.

In January 2000, he underwent a quintuple heart bypass. Five weeks later, he was back on air with his doctors at his “Late Show” guests.

In 2009, he admitted to affairs with female staffers and apologized on air alongside his wife and his team. He kept his job.

But over the years, he lost audiences to the “Tonight” show with Leno on NBC, figures dropping steadily from 7.1 million viewers in 1993-94 to 2.8 million in 2009, when Leno, three years younger, left.

Today a new generation at ease with social media — never embraced by Letterman — dominates the airwaves: Jimmy Fallon, 40, who replaced Leno; Jimmy Kimmel, 47, on ABC, Seth Myers, 41, on NBC at 00:35 am.

In August Jon Stewart, 52, is also stepping down from “The Daily Show” on Comedy Central, replaced by South African comedian Trevor Noah, 31.

Letterman who announced his intention to retire last year, will be replaced from September 8 by Stephen Colbert, 51, who until last December hosted the “Colbert Report”.

“They didn’t push me out,” Letterman told The New York Times.

“I’m 68. If I was 38, I’d probably still be wanting to do the show. When Jay was on… I thought, this is still viable — an older guy in a suit. And then he left, and I suddenly was surrounded by the Jimmys.”

Married to long-time companion Regina and the father of 11-year-old Harry, he says he has nothing lined up for retirement, which he has compared to a “punch to the head.”

“For the first time since Harry’s been alive, our summer schedule will not be dictated by me. It will be entirely dictated by what my son wants to do,” he told the Times.

“After you take a good, solid punch to the head, you’re just a little wobbly. I think in that state, it would be good to have others making my decisions.”