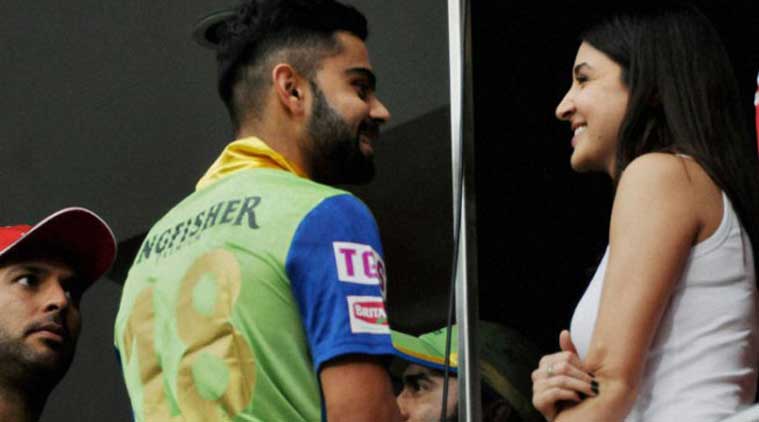 Weâ€™re talking about one of Indiaâ€™s most talked about couples — Anushka Sharma and Virat Kohli. While allâ€™s well between them, it looks like their cheese factory love story is spelling trouble for Kohli.

Virat has been accused of flouting protocols for his ladylove Anushka. Oh, boy!

The vice-captain of Team India was seen busy chatting with Anushka during an IPL match in Bengaluru on Sunday, and even Yuvraj Singh joined the two in the VIP box.

The Board of Control for Cricket in India (BCCI) on Monday ‘informally warned’ Royal Â Challengers Bangalore (RCB) skipper Virat Kohli after he broke the rules to chit-chat with his girlfriend Anushka Sharma during their match against Delhi Daredevils (DD) at Bengaluru.

He along with Yuvraj Singh broke stringent anti-corruption guidelines, when he stepped out of the dressing room and met Anushka in the VIP Box.

“We shouldn’t blow the thing out of proportion, but I have spoken to him and told him he shouldn’t speak to anyone when technically the match is still on. At the Chinnaswamy [stadium], there is only a partition between the VIP enclosure and the players area and hence he may have spoken. If the ACSU officials inform us, we will definitely warn him but I have already informally spoken to him and told him not to do this,” BCCI official and former IPL chairman Rajiv Shukla said.

However, unlike previous instances, Anushka did not only face criticism. Instead she was praised as many claimed that lady-luck worked for Virat as his team stormed into the playoffs after their concluding league match against Delhi Daredevils was abandoned midway due to heavy showers.

Now, RCB will play Rajasthan Royals in the IPL eliminator on May 20 in Pune.

Timeline of the love story