Home Sports RCB through to play-offs after match called off 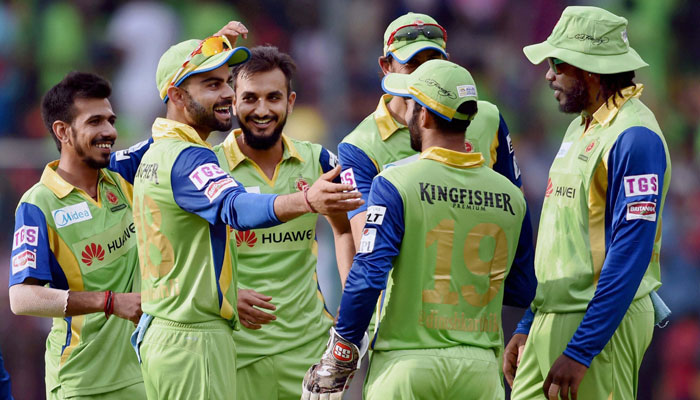 In a rain-interrupted game, another round of heavy downpour stopped the proceedings in the second over of RCB’s run-chase when they were two for no loss while chasing 188 for victory here at the Chinnaswamy stadium.

Finally the penultimate round robin league encounter of the IPL cricket tournament was called off at 7:35 pm, handing the Bangalore outfit a place in the play-offs with 16 points.

Earlier, put in to bat, Quinton de Kock’s early blitzkrieg and solid batting from captain JP Duminy propelled Delhi Daredevils to a competitive 187 for five.Â When DD batted, De Kock hit nine fours and three sixes during his 39-ball-69 while Duminy decorated his 43-ball unbeaten innings of 67 with four boundaries and three huge hits over the fence.

De Kock and Duminy’s exhilarating strokeplay enthralled the spectators to their delight.Â If De Kock’s innings was all about splendid batsmanship, Duminy’s was elegance personified.

While De Kock blazed to his half-century in 30 balls, Duminy paced his innings splendidly and completed his half-century in 35 deliveries.Â A decent opening stand of 55 earlier was provided by openers De Kock and Shreyas Iyer (20 off 18 balls). Iyer was guilty of not getting to a big score after getting his eye in.

After the departure of Iyer, De Kock and Duminy combined forces to take the total to 110 in 11.2 balls at the packed Chinnaswamy stadium.Â RCB skipper Virat Kohli made right bowling changes and reaped rewards. Harshal Patel snapped up the wickets of Iyer and Kedar Jadhav (0) while giving away 30 runs in four overs, while the other two wickets were claimed by leggie Yuzuvendra Chahal, who claimed the wickets of De Kock and an out-of-form Yuvraj Singh (11).

Initially, left-handed De Kock was the more aggressive of the two openers as he blazed through lifting the ball with great force on the leg side and cutting and driving in front of the wickets for exquisite boundaries.

The diminutive South African batsman struck David Weise for a six and two boundaries off successive balls in ninth over of the innings.Â Later in the 11th over, De Kock got couple of more sixes and a four in one from Ashoke Dinda.