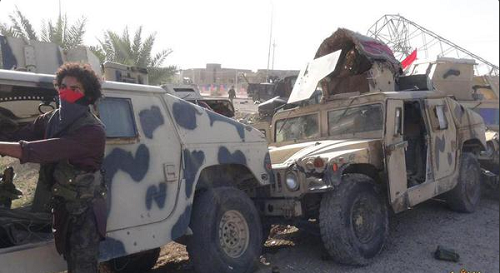 Baghdad: Itâ€™s spreading and fast staking a claim over a lot of territories. Islamic State militants seized control over the city of Ramadi, as Iraqi forces abandoned their weapons and armored vehicles to flee the provincial capital in a major loss despite intensified U.S.-led airstrikes.

Militants carried out mass killings of Iraqi security forces and civilians. Online videos showed Humvees, trucks and other equipment speeding out of Ramadi, with soldiers gripping onto their sides.

“Ramadi has fallen,” said Muhannad Haimour, a spokesman for the governor of Anbar province. “The city was completely taken. … The military is fleeing.”

Prime Minister Haider al-Abadi ordered security forces not to abandon their posts across Anbar province, apparently fearing that the extremists could capture the entire desert region that saw intense fighting after the 2003 U.S.-led invasion to topple dictator Saddam Hussein.

Sunday’s retreat recalled the collapse of Iraqi security forces last summer in the face of the Islamic State group’s blitz into Iraq that saw it capture a third of the country, where it has declared a caliphate, or Islamic State.

Earlier, al-Abadi ordered Shiite militias to prepare to go into the Sunni-dominated province, ignoring U.S. concerns that their presence could spark sectarian bloodshed. By late Sunday, a large number of Shiite militiamen had arrived at a military base near Ramadi, apparently to participate in a possible counteroffensive, said the head of the Anbar provincial council, Sabah Karhout.

According to Sunni tribal leader, many tribal fighters died trying to defend the city, and bodies, some charred, were strewn in the streets, while others had been thrown in the Euphrates River. Ramadi mayor Dalaf al-Kubaisi said that more than 250 civilians and security forces were killed over the past two days, including dozens of police and other government supporters shot dead in the streets or their homes, along with their wives, children and other family members.

The U.S.-led coalition said that it conducted seven airstrikes in Ramadi in the last 24 hours. “It is a fluid and contested battlefield,” said Army Col. Steve Warren, a Pentagon spokesman. “We are supporting (the Iraqis) with air power.”