Home Cityscape No justice for Nisha as hubby narrates story 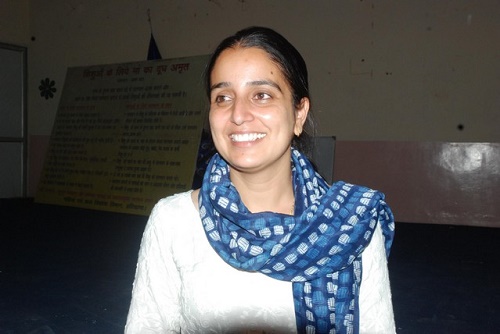 Gurgaon: The lives of Ward Councilor 30, Nisha Singh, and her husband Bhupinder Singh took a turn to the worse on the morning of Friday, May 15.

On the morning of May 15, Haryana Urban Development Authority (HUDA) officials along with police officials, commandos (male and female), and the fire brigade led JCVs and other demolition vehicles to Sector-47 to raze an alleged illegal colony that stood in front of two recently constructed Uniworld Towers to pave a road towards the entrance.

As the demolition began, at least 150 jhuggis were burnt resulting in violence breaking out between the Gurgaon cops and the villagers of Fatehpur Jharsa village, after the demolition drive began aroundÂ 10:30am. Around 400 cops including rapid action force (RAF) were deployed at the spot.

Nisha Singh, the ward councilor of the village, received a call at roughlyÂ 10am urging her to rush to the location so that the situation could be solved peacefully.

In an exclusive chat with NewsMobile, Bhupinder Singh recalls the events of that morning.

â€œAfter she got the call at 10, Nisha rushed to the spot. She has been dealing with people of both sides of the argument for quite some time and hoped to solve the issue peacefully,â€ Bhupinder said over the phone.

Bhupinder said that when Nisha asked the HUDA officials to show her documents warranting the go-ahead of the demolition, they refused to show her any documents and instead asked her to step aside.

Bhupinder said Nisha was then dragged by her hair by the female commandos into a police car. She tried to futilely fight back but was unable to stand against the might of the trained forces.

â€œAs violence broke out and forces tried to bring the situation under control, Nisha was stuffed in a police Gypsy and taken from police station to police station so that nobody would be able to pinpoint her location. As I was on a flight, my mother-in-law tried locating Nisha. She called local SHO nine times and SMSed him five times but he did not respond,â€ Bhupinder said recalling the ordeal.

Finally at around four, Nisha was brought to the Sadar Police Station where her family, Bhupinder, local councilors and the press had arrived.

â€œShe was badly bruised, was hurt, and was without footwear. She was crying profusely and could barely maintain coherence. She simply could not walk. She just cried and cried,â€ he said.

When Bhupinder requested the cops to let her go as she had to be taken to the hospital, the cops refused. Finally when Gurgaon Mayor called and asked for Nisha to be released, the cops stuffed Nisha in another Gypsy and took her for a ride. While the Gypsy was exiting the stationâ€™s gate, the gate was blocked so that no-one could follow the car.

This only enraged the locals, press and councilors further.

â€œIt was only at aroundÂ 8 PMÂ that Nisha was brought to a hospital. Initially the cops refused to let her stay at the hospital and said she had to be taken into custody immediately. When the doctor insisted that she needed medical attention did they relent,â€ Bhupinder said.

The minute Nisha was given a nod of stability by the doctors she was taken away by the police and put in jail as they said an FIR had been filed against her.

She is currently in jail and has been booked under Section 307 and has been charged with inciting violence and carrying explosives.

â€œI met her today. We are only allowed to meet her twice in one week. When I met her last, she could not even walk. Today, she was looking better. We are doing everything in our might to help her out,â€ Bhupinder said.

Gurgaon Police Commissioner was not available for comment and deputy commissionerâ€™s office denied any knowledge of the incident.

Gurgaon Administration Spokesperson told NewsMobile, “17 acres of government had been encroached upon and the team had gone to get it vacated. During this, people started pelting stone and the situation went awry. The situation is now under control and the land has been taken back. Action has been taken against the stone pelters.”