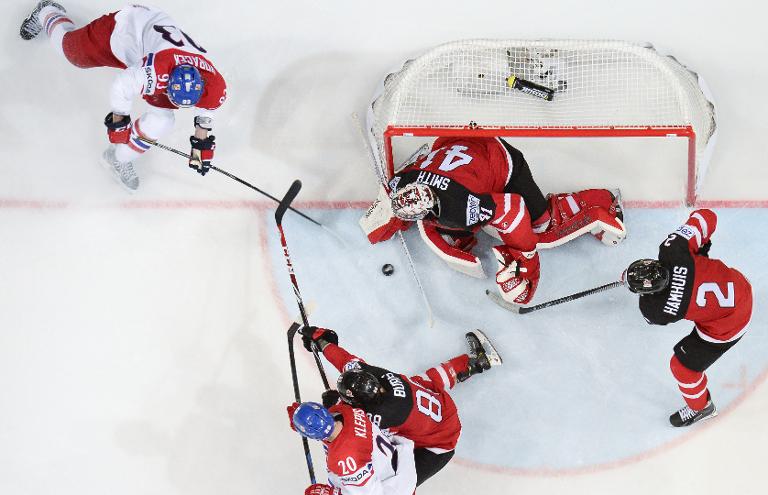 Olympic champions Canada reached the finals of the ice hockey world championship after beating the Czech Republic 2-0 in Prague on Saturday with goals by Taylor Hall and Jason Spezza.

In Sunday’s finals, Canada, who have won all nine games at the tournament, will face either the USA or Russia who are playing their semi-final later on Saturday.

Olympic winners from 2010 and 2014, Canada have secured the first medal from the world championship since 2009 while their last title dates from 2007.

The Czechs put Canada under pressure in the opening minutes but the star-packed Canadian team then gained the upper hand to dominate the game, outshooting their rivals 41-23.

Dallas wing Spezza made it 2-0 on 30 minutes with a low wrist shot from the faceoff circle that took Winnipeg goalie Ondrej Pavelec by surprise.

The Czechs scored before the second intermission but the referees disappointed the 17,000 fans packed into the arena as they disallowed the goal for crease violation — a verdict that TV footage proved wrong.

“We came here to have a chance to compete for the gold medal and now we have that,” Spezza told AFP.

“Once we got the two goals, we sat back, defended. They came on and played us in the third period but we did a great job of defending.”

Hall said the game was a challenge for Canada after a few easy games including the 9-0 quarter-final thrashing of Belarus.

“I was anxious to see how we were going to respond and in the first five or ten minutes they got some shots and some chances but after that we settled down and we found our game.”

Czech wing Jaromir Jagr, the 43-year-old Florida Panthers veteran who led his team past Finland in a quarter-final thriller, said the Czechs’ failure to score early into the game was key.

“We played them as we had wanted but unfortunately we failed to score in the first ten or fifteen minutes, then we got a bit tired.”

“In the second period you could see they didn’t really have to work hard during the tournament, they had far more strength left.”

Looking at Sunday’s finals, Spezza said the identity of the opposition did not really matter.

“It’s going to be our toughest game, they’re both big rivals for us and you’re playing for the gold medal so it doesn’t matter who you play, it’s an important game.”

Hall said he expected a “fun night” on Sunday.

“There’s going to be a lot of emotion and I think there’s a lot of guys who are searching for their first world championship gold medal so it’s going to be fun.”