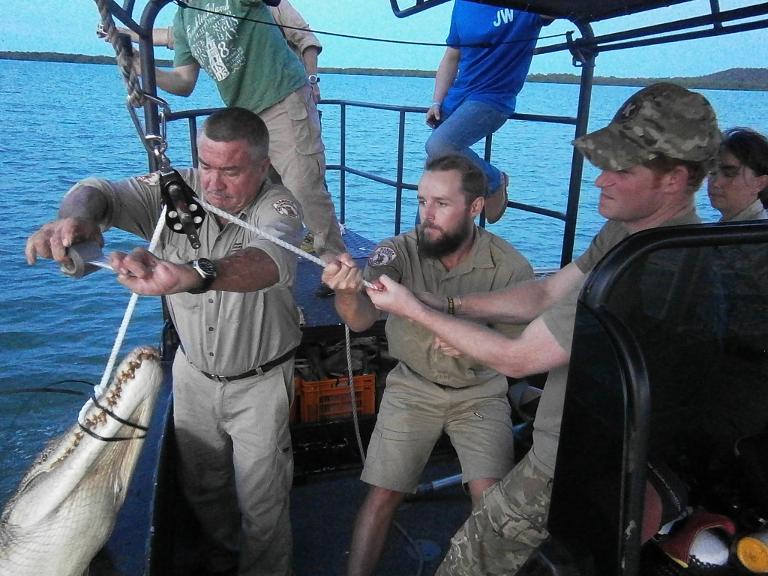 Britain’s Prince Harry had a close encounter with a ferocious crocodile during his recent trip in Australia, with officials revealing Saturday he helped capture a 3.1 metre predator.

Harry spent a month Down Under with the Australian Army, an experience which involved learning bush survival skills, flying helicopters and working with elite SAS commandos.

The 30-year-old British prince also helped to snare a crocodile from a trap, pulling in the animal from Darwin Harbour and straddling it after its jaws had been taped closed.

“Prince Harry went out on the croc boat and helped our rangers remove a 3.1 metre (10 feet) saltwater crocodile from a trap in Darwin Harbour,” Northern Territory Minister for Parks and Wildlife Bess Price said.

“This top secret mission is sure to leave a unique, lasting impression of the Territory with Prince Harry,” she added in a statement.

Prince Harry was welcomed to Australia by hundreds of well-wishers in Canberra on April 6 — including one who asked to marry him — but his day-to-day activities with the Army were kept under wraps.

Ranger Erin Britton said Harry, who toured Afghanistan twice during a decade in the British Army, was not scared to get close to the crocodile, which was later taken to a local farm.

“He’d make a great croc catcher,” she said. “He responded to directions when catching the croc, helped pull it into the boat and did a great job.”

Britton said she hadn’t been sure what to expect of the prince “because you don’t meet royalty every day,” but had found him to be a “sweetie”.

“I was a little nervous at first when I was getting the snout rope on the croc because Harry was observing so closely, but he was so easy-going that I relaxed pretty quickly,” she said.

“I found him very approachable and easy to chat with.”

Rangers in the Northern Territory often have to remove crocodiles from waterways used for boating and fishing to limit the risk of fatalities and injuries.

Crocodiles are common in Australia’s tropical north where their numbers have increased since the introduction of protection laws in 1971 to around 75,000 to 100,000.

Britton said there was “no doubt” the visiting prince enjoyed snaring the crocodile, saying he had been “taking plenty of photos with a huge smile”.

Senior Wildlife Ranger for the Crocodile Management Team, Tommy Nichols, agreed the prince seemed to enjoy the visit on April 15.

“Prince Harry managed to speak to all members of the crocodile team during the time he spent with us and he appeared to be a nice bloke,” he said.

“It was the first time any of us had met a member of the Royal Family and we were all very excited.”