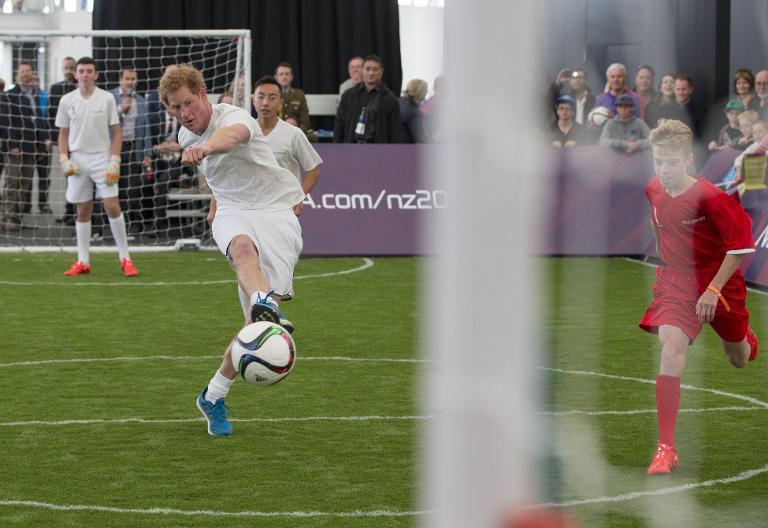 Britain’s Prince Harry wrapped up a visit to New Zealand and Australia on Saturday by scoring the winning goal in a football match and proving he can help capture a crocodile.

The 30-year-old prince spent a week in New Zealand, which started with a pub quiz on an outer southern island, included learning a traditional haka at a military camp, and finished with a day of sport at Auckland.

He also revealed during the official visit that he wants to have children and would like a partner to “share the pressure” of royal duties, but is still waiting for the right woman.

As New Zealand prepares to hold a referendum on whether to change its flag, which features the British Blue Ensign, Harry used a farewell reception to highlight his family’s ties with the country.

“These links are of course central to the constitution of this nation, but they go much deeper than that,” he said.

“They are built on a profound personal fondness for this captivating country and its charming, talented people.”

He also touched on his love of rugby and although the sport featured prominently during his visit, he joked that he was not on a spying mission ahead of the World Cup in England later this year.

“I’ve always wanted to know how you can be so damned good with such a small population. But don’t worry, I am not here to spy on you. I come in peace, despite what people think.”

But it was with football that the fifth-in-line to the throne closed his public duties.

He starred in a five-a-side match between New Zealand representatives and volunteers working at the FIFA U20 World Cup, which starts in New Zealand later this month.

The score was locked at seven-all before Harry, nicknamed “Scholesy” for the game because of his red hair similar to former England player Paul Scholes, slammed home the winner.

Harry was “not too shabby with the skills. (But) he can’t do everything. His juggling wasn’t the best,” according to 14-year-old volunteer Sam Bottomley.

Volunteer Antonio Hernandez, now of Auckland but originally from Mexico, let the prince know how “England sucked at the last World Cup!” and added Harry “was very relaxed. He can work on his skills, but he plays all right for a prince.”

Harry then visited the Millennium Institute, New Zealand’s high performance sports hub, where he tried his hand at netball and weightlifting.

The prince’s tour of New Zealand came after he spent a month with the Australian Army, during which time he learned bush survival techniques, flew a helicopter and helped capture a crocodile.

Prince Harry was welcomed to Australia by hundreds of well-wishers in Canberra on April 6 but his day-to-day activities with the Army were kept under wraps.

It emerged on Saturday that the royal had helped to snare a crocodile from a trap while in the Northern Territory, pulling in the animal from Darwin Harbour and straddling it after its jaws had been taped closed.

Ranger Erin Britton said Harry, who toured Afghanistan twice during a decade in the British Army, was not scared to get close to the crocodile, which was later taken to a local farm.

“I was a little nervous at first when I was getting the snout rope on the croc because Harry was observing so closely, but he was so easy-going that I relaxed pretty quickly,” she said.

Rangers in the Northern Territory often have to remove crocodiles from waterways used for boating and fishing to limit the risk of fatalities and injuries.

Prince Harry has been in Australia and New Zealand after calling time on his military career.