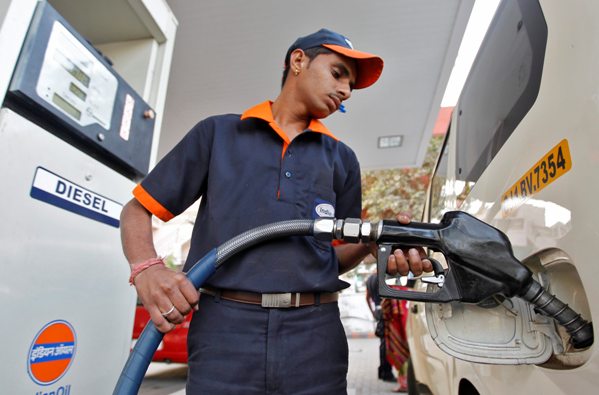 New Delhi: Life is like a roller coaster ride. Ups and downs are a part and parcel of the game. If one thing, however, comes close to fitting the bill of a rather unpredictable roller coaster, the fuel prices in India would win hands down.

The Modi government has done quite a few things, but now, it just seems like itâ€™s teasing us around. Did it slash the fuel prices as promised? Yes, it did. Did it also hike it? Yes.

And there, it has done it again.

The latest hike is the second straight one in a fortnight. While petrol prices were hiked by 3.13 per litre, diesel prices were raised by Rs 2.71 per litre, tracking global crude oil prices.

And thanks to this new development, people are making a beeline for the pumps.

â€œThe sudden changes affect our daily life. Now prices of other household things will increase and we have to bear with it too,â€ Surender Singh, a Gurgaon-based daily-wage earner, said. â€œThese prices never go down when fuel rates are slashed. They just scale higher and higher,â€ he added.

The two consecutive hikes have wiped away more than one-third of the gains that consumers bagged when global rates began to fall in August last year.

â€œSince the last price change, there has been a steep increase in international prices of both petrol and diesel. INR-USD exchange rate has also depreciated quite significantly during this period. Combined impacts of both these factors warrant an upward revision in prices, the impact of which is being passed on to the consumers with this price increase,â€ Indian Oil said in a statement.

The international crude oil price of Indian Basket, as computed by Petroleum Planning and Analysis Cell (PPAC) under the Ministry of Petroleum and Natural Gas was $64.88 per barrel (bbl) on Thursday. This was lower than the price of $65.70 per bbl on previous publishing day of Wednesday.

Meanwhile, if compared globally, petrol price is cheaper in Pakistan and Sri Lanka, where a litre would cost Rs 44.05 and Rs 54.75 respectively. However, prices are high in Bangladesh and Nepal at Rs 76.97 per litre and Rs 68.13 a litre respectively.

5. Better targeting of subsidies (subsidised kerosene for only BPL families and subsidised LPG for only domestic purposes)

6. Implementing a unified Goods and Services Tax (GST) across the country on petroleum products.