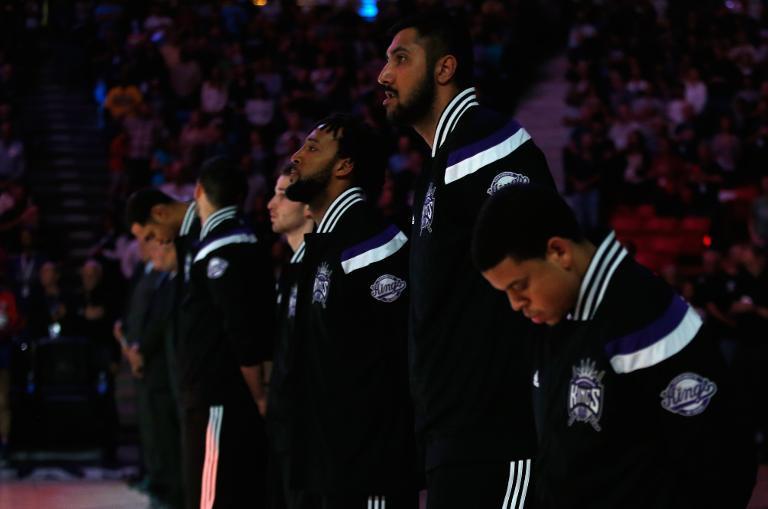 The NBA is forging ahead with plans for world domination, hoping that India will be the next Asian power to be seduced by hoop dreams after already captivating China.

The landmark appearance of Sim Bhullar for the Sacramento Kings last month, the first player of Indian descent to score in the NBA, gave a fresh jolt to the league’s bid to win over the cricket-mad nation of 1.3 billion.

The NBA opened an office in Mumbai in 2011, part of a sophisticated international operation that has spread to all corners of the globe at a time when the league itself is becoming increasingly cosmopolitan.

A record 14 live NBA games are being screened in India each week this season, while more than 50 million viewers tuned in to NBA programming during the 2013-2014 season.

The NBA in April announced its first game in Africa, an August exhibition pitting a “Team Africa” consisting of first- and second-generation NBA stars from Africa against “Team World,” composed of players from other regions.

In the 2015-16 season, NBA stars will also venture to Brazil, China and Mexico for exhibition or regular season play. The 2014-5 itinerary included Turkey, Germany and Britain.

The prospect of an NBA game held in India is also on the league’s radar.

“We’re still a ways away from having a game in India, but there is a large appetite for us to play a game there,” LaRocca said.

The league’s basketball clinics reached more than 200,000 children in 13 countries in 2014, and the NBA now has an unprecedented number of foreign-born players (101) competing in games broadcast to almost every country on the planet.

The overseas push has been a boon to the personal brand of NBA players and to the league’s corporate sponsors and partners.

In China, the league’s biggest overseas market, more than a dozen players have at least one million followers on Weibo, the Chinese version of Twitter.

The Spanish bank BBVA, the official bank of the league and the title sponsor of NBA games in Spain and Turkey, sees strong consumer interest not only at home, but in key international growth markets, like Mexico, Argentina and Colombia, where fans are embracing basketball along with football.

Passion for basketball is “especially strong in a demographic we’re very interested in, which is younger, more urban consumers that will be more and more the customers of the future,” said Carlos Ricardo, BBVA’s head of global marketing.

The Anschutz Entertainment Group has opened state-of-the-art stadiums over the last decade that have hosted NBA games in London and Berlin, and runs arenas in Beijing and Istanbul also used for games.

Sports business consultant David Carter said the NBA had been smart in choosing its targets for overseas growth.

Basketball was popular in China long before the first game involving NBA stars in 1979.

Other overseas markets, including Germany, Spain and Brazil, have national professional basketball leagues, some stretching back decades.

“They’ve taken a distinct advantage and made sure that they’ve exploited it to the fullest,” Carter said.

Still, he added, the NBA has “a long way to go” before basketball overtakes football (soccer), a sport with the most popular global team event, the World Cup.

The NBA’s LaRocca said the World Cup is an “unbelievable global event,” but dismissed the idea that an equivalent success in basketball was “essential” to fulfilling the NBA’s goals.

The NBA’s growth rests on building the sport in new markets on the grass-roots level, he said. Just last week, Bhullar won a hero’s welcome as he led junior NBA programs in two cities in northern India.

The 7-foot-5 Bhullar has been likened to former NBA superstar Yao Ming, who helped fuel the basketball boom in China. But LaRocca said foreign players do not need Yao’s prowess on the court to make a difference off of it.

“We’ve seen players come into the league from various parts of the world that may not have been perennial all-stars but still make an impact on their home markets,” he said.