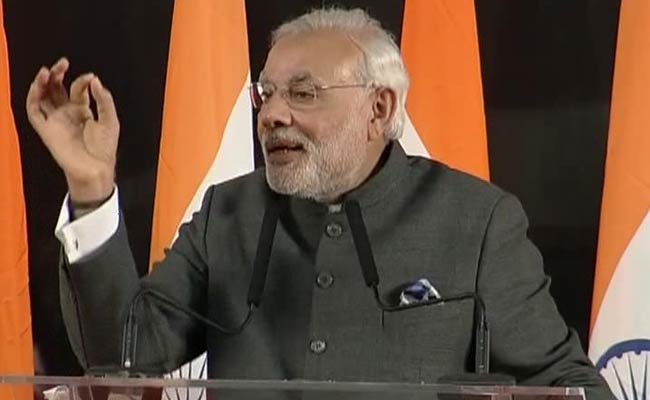 Shanghai: It was yet another block buster moment for Indian Prime Minister Narendra Modi in Shanghai as he spoke to around 5000 NRIâ€™s in Chinaâ€™s financial hub.

â€œThe time is changing at a fast pace. Nobody would have wondered, that in China, so many Indian citizens will be living a peaceful, happy life.â€

â€œI had said that I will not leave any stone unturned with my hard work. Have I taken any leaves? Am I vacationing? Have I not being working sincerely,â€ he added.

On a day when he won the thumping victory in the Lok Sabha elections in May 2014, Modi said, â€œEvery Moment of mine is for 125 crore Indians,â€ he said to the loud cheer of â€˜Modi, Modiâ€™ as he wrapped up his China visit and is now headed to Mongolia followed by South Korea on his three nation tour.

Wrapping up his session, Modi said: â€œThis is my last programme in China. While you will enjoy a Sunday off tomorrow, I will be working in Mongolia.

â€œCan you imagine, Mongolia calling a session of its Parliament on a Sunday andÂ  the Indian PM addressing it.â€

Urging the Chinese to connect with India, Modi said, â€œIndia’s tourism will grow but more than that China’s people will have a new perspective of understanding India.â€

Like his New York, Sydney and Toronto moment he added Shanghai to his rock gigs which touched a chord with the Indian Diaspora that believes that the Prime Minister cares for them and is keen to connect with them.