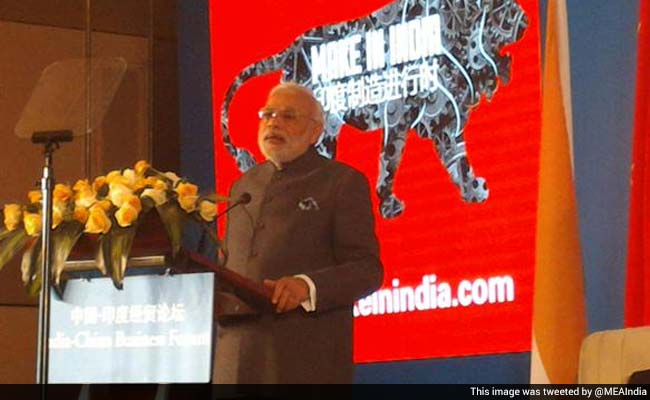 To Chinese business, PM Modi said, “Now India is ready for business, you would have seen winds of change… I assure you of my personal attention for your success.”

“You are the ‘factory of the world’. Whereas, we are the ‘back office of the world’… Let us work together in mutual interest and for progress and prosperity of our great countries,” the PM said in his speech to executives from 200 Chinese and Indian companies, making a strong pitch for his ‘Make in India’ campaign.

The PM began his engagements in Shanghai, the last stop in his three-city, three-day visit to China, by meeting 22 top Chinese CEOs.

“I have come to say to you Make in India,” he told them and talked about what he called the “5F Formula – From Farm to Fibre to Fabric to Fashion to Foreign.”

Lin Bin, President of phone maker Xiaomi, said, “We have some big plans for India, we fully support Make in India.”

The PM flew to Shanghai on Friday evening from Beijing, where he held talks with Chinese Premier Li Keqiang.

An economic boost from his China trip is a key focus for PM Modi, who is seeking to deliver on election promises for foreign investment, with his first year in office about to end.

The trade imbalance between the two countries has figured high on the agenda in his discussions with China. Chanda Kochhar of ICICI and Rajan Bharti Mittal of Bharti Enterprises Airtel, who were among 39 Indian Industry leaders in Shanghai said that the growing trade deficit is a huge worry.

A list of the 21 agreements signed today, circulated by Indian officials, showed many of the contracts were for Chinese banks to finance Indian firms, and also included deals in the telecom, steel, solar energy and film sectors.