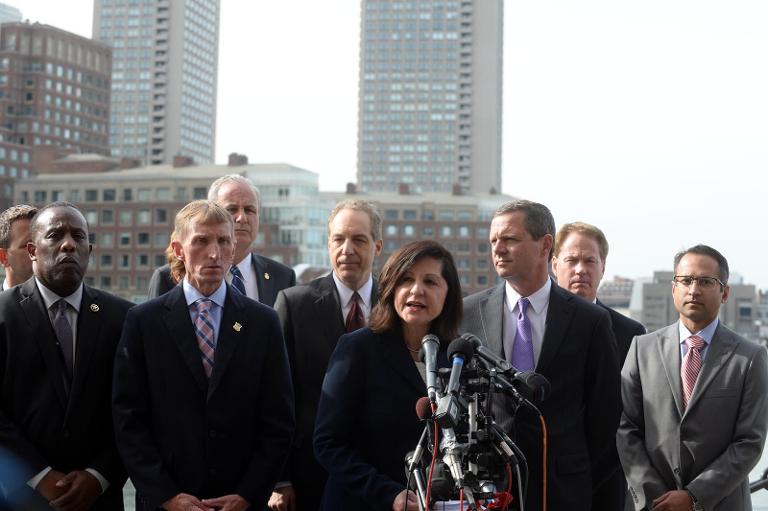 21:52 GMT – With the end of victim statements and reaction from the prosecutors, we are closing our Live Report on the sentencing of Dzhokhar Tsarnaev to death for the April 13, 2015 bombings near the finish line of the famed Boston Marathon. Two bombs planted by Tsarnaev and his older brother killed three people, including an 8-year-old child. More than 260 people were wounded, with many losing legs. Tsarnaev was convicted on all 30 counts relating to the bloody attacks on April 8, 2015 and the same jury was charged with deciding whether he would live or die.

In federal death penalty cases, the defendant is automatically granted an appeal. Such convictions are very rarely overturned, but regardless, Tsarnaev faces many years in prison before his sentence might be carried out.

21:39 GMT – Victim Laurie Scher calls the entire trial and sentencing “exhausting.” Asked by a reporter if the defense has succeeded in “humanizing” Tsarnaev, she is pensive.

“I think there’s no doubt that i’m sure at one time in his life, he was a very lovely, caring young man. What he turned into obviously was — we know what he turned into. He turned into a monster. Why did that happen? We’ll never know. My feelings on him are nothing but — what can i say?

“Can it be a relief to you knowing that he’s going to get the penalty?” the reporter continues.

21:27 GMT – After the bombing and during the search for the purpetrators, a campus police officer at the Massachusetts Institute of Technology was shot and killed by the Tsarnaev brothers. The MIT Police Chief John DiFava stated his respect for the jury.

“On behalf of the entire MIT Police Department, I would first like to offer my continued sympathy and support for the victims and their families. While the horror they have endured can never be undone, I hope that the conclusion of the trial and the subsequent verdict can offer some kind of closure, no matter how small.

I would also like to extend my deepest thanks and appreciation to the United States Attorney’s Office and the prosecution team; the FBI and supporting law enforcement agencies, and the men and women of the jury who were confronted with an extremely difficult decision and performed admirably.

We respect the judicial system in the United States and its well defined process. No verdict could erase the horrible tragedies that have occurred, and we respect the decision of the jury.”

“One thing people need to know is the FBI and law enforcement partners show up to work every single day for the victims who rely on us to bring these people to justice and that’s just what we did here. But the most amazing thing was the inspiration and motivation that these victims gave us every single day. Their unimaginable strength was a constant reminder to us why we had to keep pushing forward and pursuing every single lead. So to the victims I just want to say, thank you. Your strength has been nothing but inspirational and strengthened our resolve to continue to show up to work every day for victims of all crimes.”

21:03 GMT – Ortiz says Tsarnaev will remain in the custody of the US Marshals until his formal sentencing hearing. It will then fall to the Bureau of Prisons to decide where he will await execution.

20:57 GMT – US Attorney Carmen Ortiz begins her comments by thanking the jurors and says the process had “shown the world what a fair and impartial jury trial is like.”

“Even in the wake of horror and tragedy, we are not intimidated by acts of terror or radical ideals. On the contrary,” she said. “The trial of this case has showcased an important American ideal. That even the worst of the worst deserve a fair trial, and due process of law. Today the jury has spoken, and Dzhokhar Tsarnaev will pay with his life for his crimes.”

“Make no mistake. The defendant claimed to be acting on behalf of all Muslims. This was not a religious crime. And it certainly does not reflect true Muslim beliefs. It was a political crime designed to intimidate and to coerce the United States.”

20:51 GMT – According to ABC, Tsarnaev’s father, Anzor, reached in Dagestan said “We will fight until the end… We had hope & still do…. It is hard.”

20:39 GMT – Adrianne Haslet-Davis, a dancer who lost a leg that day, announced she was “thrilled” with the decision. “My heart is with our entire survivor community. I am thrilled with the verdict! “

Just before death was announced, she made her feelings clear about efforts to humanize the bomber.

“Dear if you show pics of him as a child smiling at camera knowing all of strong is watching, let me remind you to [email protected] off.”

20:34 GMT – Survivor Sydney Corcoan, who was nearly killed in the attack along with her mother, first tweets: “YES.” Then she calls the verdict justice.

“My mother and I think that NOW he will go away and we will be able to move on. Justice. In his own words, ‘an eye for an eye’.”

20:22 GMT – The youngest victim was eight-year-old Martin Richard, who was was torn apart by one of the pressure-cooker bombs. His younger sister Jane lost a leg. The family has been vocal in their hope that Tsarnaev would get life in prison instead of death, saying the long appeals process would deny them closure. The father, Bill Richard, had to wear headphones in the courtroom today to hear the verdict as he suffered hearing damage in the attack. CNN’s Deborah Feyerick described them as “stoic” after death was announced.

20:15 GMT – According to video posted by BuzzFeed’s Mike Hayes, Tsarnaev’s defense lawyers have left the courtroom without speaking to reporters. A bank of microphones does awaits victims’ families outside. The jurors are allowed to speak to the media, but could also leave quietly.

20:09 GMT – The jury was tasked with working through a complicated, 24-page verdict form when deciding his fate. The form had eight sections addressing different aspects of his crimes, including his age, his motivations and any mitigating factors.

20:02 GMT – The death penalty, while common in some states, notably Texas, is a rare punlishment in the federal courts. Since being reinstated as an option in 1988, only three convicts have been put to death by the US government.

It is banned in the liberal, and largely Catholic, state of Massachusetts, where the trial took place and was opposed by some of the victims. However, since the case was tried in federal courts, the government had the option to seek death.

“The ultimate penalty is a fitting punishment for this horrific crime and we hope that the completion of this prosecution will bring some measure of closure to the victims and their families,” Lynch said.

19:57 GMT – Boston Mayor Martin Walsh, says he hopes the verdict brings closure to a painful chapter in the city’s history.

“I want to thank the jurors and the judiciary for their service to our community and our country. I hope this verdict provides a small amount of closure to the survivors, families, and all impacted by the violent and tragic events surrounding the 2013 Boston Marathon. We will forever remember and honor those who lost their lives and were affected by those senseless acts of violence on our City. Today, more than ever, we know that Boston is a City of hope, strength and resilience, that can overcome any challenge.”

19:54 GMT – TV images show crowds gathered around the federal courthouse in Boston, but no chanting or celebration. The mood seems as somber as it was inside the courtroom.

19:51 GMT – According to tweets from reporters inside the courtroom, it is an emotional scene. The Boston Globe’s Kevin Cullen says “The jurors seemed wrecked. Several dabbing their eyes.” WBZ’s Jim Armstrong notes several jurors were crying.

It took the jury more than 14 hours to decide that execution was the right sentence for Tsarnaev, who was convicted of carrying out one of the bloodiest assaults in the United States since the September 11, 2001 attacks.

The 12-strong panel has previously convicted the 21-year-old of Chechen descent on all charges relating to the April 15, 2013 bombings. Three people were killed and 264 others wounded, including 17 who lost limbs, in the twin blasts near the finish line at the northeastern city’s popular marathon.

Government prosecutors successfully convinced the jury Tsarnaev is a remorseless terrorist who deserves to die for inflicting the carnage. The defense insisted he was a “lost kid,” manipulated into the “heinous crime” by his radical older brother.