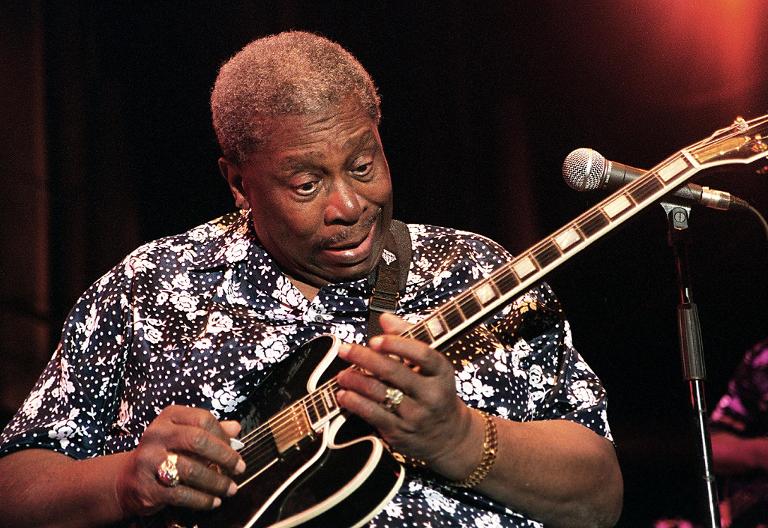 Blues legend B.B. King, whose crisp, powerful guitar licks made him among the instrument’s greatest masters and a towering influence for generations of musicians, has died at 89.

The impoverished son of a Mississippi sharecropper who for a half-century was revered as one of music’s iconic figures, King passed away late Thursday, his official website said in a brief statement referencing one of his most famous songs — “The Thrill is Gone.”

King until late last year, when his health declined, maintained a touring schedule that put much younger artists to shame.

He issued a final statement on May 1, announcing that he was beginning hospice care at his home in Las Vegas.

“The blues has lost its king, and America has lost a legend,” said President Barack Obama, who recalled once being persuaded to sing “Sweet Home Chicago” at the White House with King.

“B.B. may be gone, but that thrill will be with us forever. And there’s going to be one killer blues session in heaven tonight,” Obama said.

Former president Bill Clinton — who performed twice with King — and Hillary Clinton in a statement mourned “a brilliant blues guitarist and a kind, good man.”

Artists across genres who recalled his famous geniality also hailed King as a defining force in 20th-century music.

“There are not many left that play it in the pure way that B.B. did,” said rock-blues guitarist Eric Clapton, who thanked King in a short video that was receiving nearly one million views an hour on Facebook.

The Rolling Stones also paid tribute to the bluesman, with Mick Jagger writing on Twitter that King “was someone we all looked up to.”

Singer-musician Lenny Kravitz wrote of King: “Anyone could play a thousand notes and never say what you said in one.”

– Bringing and expanding the blues –

Born in poverty as Riley B. King, the future legend started to work in the cotton fields at age seven, but found his life transformed after the self-taught guitarist discovered music just a few years later.

King christened his trusty guitar Lucille — a reference to a brawl over a woman between two men that set off a fire through which King rushed to save his instrument.

But King also managed to bring the blues to a white and international audience, setting in motion the direction of rock.

He was invited in 1968 to perform at San Francisco’s Fillmore West, a haven for hippies, and a year later reached a wider audience when he opened 18 US concerts for the Rolling Stones.

“The Thrill is Gone” was characteristic of King’s blues — driven by angst but also his warm demeanor, interspersed by biting guitar licks.

In 2003, Rolling Stone magazine ranked him the third greatest guitar legend, after Jimi Hendrix and Duane Allman and just ahead of Eric Clapton.

King developed his distinctive style in the 1950s as he toured incessantly with his band. A natural entertainer on stage, he wove stories from the poor South with tales and jokes from his often colorful love life.

His guitar playing focused not on speed or on sweeping chords but instead on well-chosen, sharp single notes.

He never took up the slide guitar like most Delta bluesmen, but substituted with a vibrato.

King in his prime put in more than 300 concerts a year, despite suffering Type II diabetes for the last two decades of his life.

“I have a disease which I believe might be contagious,” he told AFP in an interview in 2007. “It’s called ‘need more.'”

But another reason King stayed on the road was in hopes of keeping the blues alive.

“With the exception of satellite radio today I don’t hear no blues playing on the radio,” he told AFP. “One of the reasons I travel a lot is so I can carry the music to the people. Because if I don’t carry it, it don’t go on the air.”

Fans noticed that recent performances had become increasingly erratic, and King finally stopped touring in October, after falling ill at a show in Chicago. His health continued to decline until his death late Thursday.

Despite decades of recognition, King’s final days were clouded by unseemly scenes amid an apparent dispute between his family and manager over his care.

The music legend was cited as an influence by a Who’s Who of musical greats including Clapton, who recorded the 2000 album “Riding With the King” with him.

The album won a Grammy, one of 15 racked up by King during his career.

Other famous collaborations included the song “When Love Comes to Town” with U2.