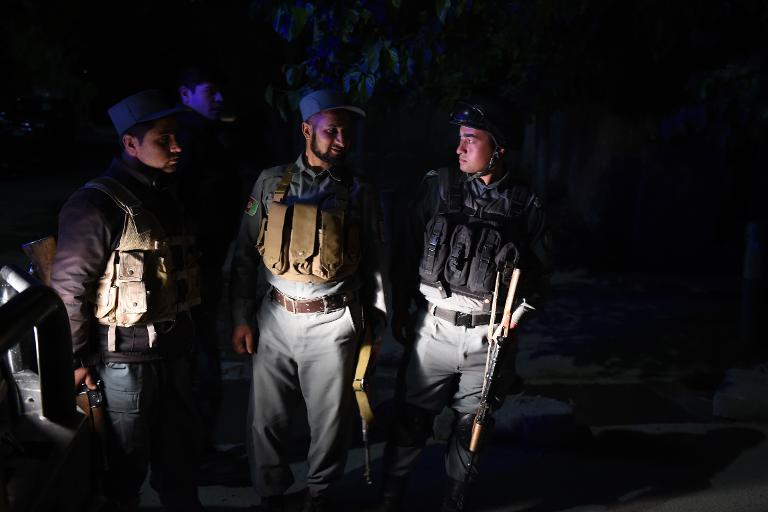 Fourteen people, most of them foreigners, were killed in a Taliban attack on a Kabul guesthouse that trapped dozens attending a concert and triggered an hours-long standoff with Afghan forces, officials said Thursday.

Four Indians, two Pakistanis, an American, an Italian and a British-Afghan dual national were among those killed in the overnight siege on the Park Palace, which was about to host a performance by a well-known Afghan singer.

The Taliban claimed responsibility for the seven-hour assault, which triggered explosions and bursts of gunfire. It came as Afghan forces face their first fighting season against the insurgents without the full support of US-led foreign combat troops.

“An attack against civilians gathered for a cultural event in the Park Palace hotel in Kabul killed 14 civilians and injured several others,” the United Nations Assistance Mission in Afghanistan (UNAMA) said in a statement.

“Fifty-four people were rescued by security forces,” Rahimi added, after a large number of armed personnel swooped on the guesthouse, located in an up-market district and popular with international aid agency workers.

An Indian foreign ministry official said that “unfortunately four Indians have died in the attack as per the information we have so far”.

Prime Minister Narendra Modi had spoken with Afghan President Ashraf Ghani to offer his condolences, saying “we are one when it comes to fighting terror”.

US embassy spokeswoman Monica Cummings said: “Our thoughts are with the families of the victims at this time.”

The Pakistani embassy said two of its nationals were killed and the British embassy confirmed the death of a British-Afghan dual national, adding in a statement that “the next of kin have been informed and we are providing consular assistance”.

The Taliban, which has stepped up assaults on government and foreign targets, said that the attack was carried out by a single gunman and “planned carefully to target the party in which important people and Americans were attending”.

The attack was also claimed by the Taliban-allied Haqqani network that is believed to be based out of the porous Afghanistan-Pakistan border region.

“One of our suicide squads carried out the raid. We prepared for it for two months and will continue to carry out these attacks,” a senior Haqqani commander in charge of suicide operations told AFP by telephone.

Afghan police gave conflicting accounts of how many gunmen were involved.

“So far we have identified one attacker, but we are looking to see if there were more,” Rahimi said.

The Park Palace was due to host a concert by classical singer Altaf Hussain, with several VIPs invited, when the gunfire started, a guesthouse employee told AFP.

The employee, who did not wish to be named, said he barricaded himself in a room in the building when the shoot-out began and heard several people screaming in the corridors as gunshots rang out.

He later managed to flee the guesthouse and said he saw at least five blood-covered bodies lying near the entrance.

Police could be seen surrounding the guesthouse on Thursday, blocking access to the building.

Inside, doors were smashed along with tables and windows, while blood stained the floors, according to the employee. Other tables prepared for the concert in the front yard still had refreshments laid out.

Amnesty International condemned the attack, saying it was a “stark reminder of the Talibanâ€™s contempt for human life” and reflected “a worrying new surge in the armed groupâ€™s targeting of civilians around the country”.

The assault came as NATO on Wednesday formally announced plans to retain a small military presence in Afghanistan after 2016 to help strengthen local security forces.

NATO Secretary-General Jens Stoltenberg said the future mission would be led by civilians and “will have a light footprint, but… (with) a military component”.

Afghan forces are now solely responsible for security in the volatile country, after NATO’s combat mission formally ended in December with a small follow-up force staying on to train and support local personnel.

The attack also comes a day after a visit to Kabul by Pakistani Prime Minister Nawaz Sharif, who assured Afghanistan of Islamabad’s full support in its battle against the Taliban, saying “the enemies of Afghanistan cannot be the friends of Pakistan”.

His unusually strong remarks are the latest sign of a thaw in the once-frosty relationship between the two countries. Afghan officials have frequently accused longtime nemesis Pakistan of harbouring and nurturing Taliban insurgents.

But Ghani has actively courted Pakistan since coming to power in what observers say is a calculated move to pressure the insurgents to come to the negotiating table.

Taliban insurgents, who have waged a 13-year war to topple the US-backed government, launched their spring offensive across Afghanistan late last month.