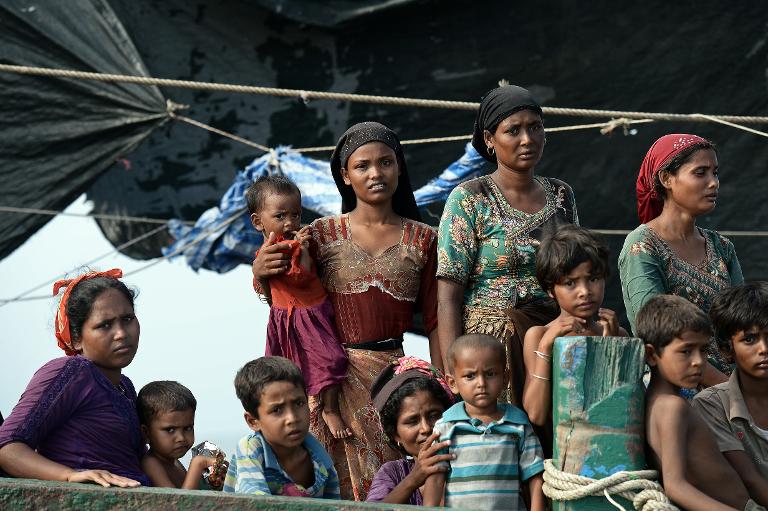 A boat packed with desperate Rohingya migrants left Thai waters early Friday bound for Indonesia, authorities said, in line with the kingdom’s policy of blocking entry to such vessels.

Thai officials gave food and water to hundreds of emaciated Rohingya who have been at sea on the overcrowded boat for weeks. In recent days they were abandoned by their traffickers, who also disabled the engine before fleeing.

“We fixed the engine and the boat left last night after 3am,” Satun provincial governor, Dejrat Limsiri, told AFP, in line with Thailand’s policy of “helping on” such vessels.

“We gave them ready-to-eat meals. They are now out of Thailand territory… they will try to go to Indonesia as it seems they cannot get to Malaysia,” he said.

“They are heading along the route to Aceh,” he added, referring to the Indonesian province where another migrant boat landed on the weekend.

The boat that had been in Thai waters, with around 300 people on board including many young children, was found drifting on Thursday. Its bedraggled passengers were visibly emaciated and pleaded for help.

In dramatic scenes later in the day, a Thai navy helicopter dropped food packages into the water, prompting several men to dive into the sea to retrieve them — some eating raw instant noodles as they swam back.

Around 10 people died on the boat during the past few days, passengers told reporters who drew up alongside.

The Satun governor said authorities had helped the migrants on towards their intended destination further south, but denied pushing the boat out of Thai waters.

“They want to go to Malaysia but they cannot go now. They do not want to come to Thailand as they know they will face legal action… and will be sent back to Myanmar,” he said.

The UN’s refugee agency has led calls for a coordinated search and rescue effort for some 8,000 migrants believed to be trapped on boats in the Andaman Sea since a Thai crackdown prompted traffickers to flee, leaving their human cargo without food and water.

But regional nations have so far resisted a comprehensive search effort.

Instead Malaysia and Indonesia have vowed to bar boats bearing desperate migrants from Myanmar and Bangladesh after nearly 2,000 people were rescued or swum to shore earlier this week.

The stateless Muslim Rohingya are unwanted in Myanmar, where they face persecution and are treated as foreign migrants rather than a Myanmar ethnic group.