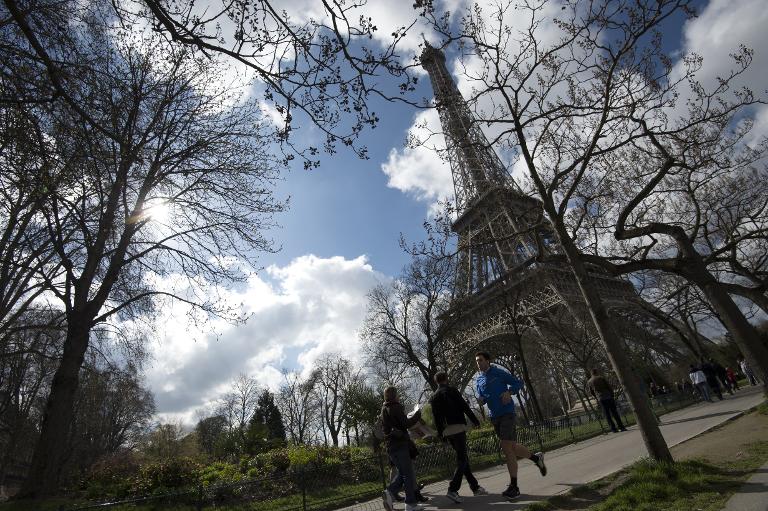 The epitome of Gallic beauty, French film star Catherine Deneuve — probably clouded in a haze of cigarette smoke — once scoffed at the idea of working out, saying: “I am not American.”

But in recent years the country which produced reams of analysis over former President Nicolas Sarkozy’s love of jogging has rapidly caught onto the idea of what is known in French as “le running”.

Nowhere is this more evident than in Paris where, as the spring sun emerges, so have hordes of runners thundering through leafy parks and even the streets — where anyone trying to jog would once have been immediately identified as an American tourist.

“It’s true that the French are slightly behind Anglo-Saxon countries on the need to get themselves in shape,” said Thomas Godard, business unit manager for sports brand Adidas in the country.

But the company has noted “a genuine explosion of running in France,” where it is the fastest-growing segment of the sports market with double-digit growth.

All over the world running has undergone somewhat of a revolution in recent years.

No longer the sport of an individual male loping along in a faded tracksuit perhaps aiming for a marathon, it is increasingly a group activity accompanied by fashionable, brightly coloured clothes and high-tech smartphone accessories and applications to track your progress.

“Today running has become what we call a ‘hit’ sport, it is trendy,” says Godard.

Fresh from a run in the Bois de Vincennes — a massive park in eastern Paris where joggers sometimes appear to outnumber picnickers — Nicolas Rolin, 34, says he has noticed the sudden leap in people taking up the sport, even in his own group of friends.

He only began running last September, and told AFP he feels the surge in less daunting races of 5km or 10km (six miles) and fun runs has made the sport “more accessible”.

From the Colour Run — where runners are doused in coloured powder — to a race around the Versailles castle with participants dressed as princesses and knights, the fun run craze shows the sport’s evolution into a pleasure-seeking social activity that is not just about competition.

“It’s also free!” said Rolin’s fiancee Clio Comparelli who took up the sport a month ago to get in shape for their wedding.

In a nod to Paris’s status as a running hub, Adidas chose the French capital to launch a novel social-media driven concept known as the Boost Battle Run.

Eleven different neighbourhoods of the capital have organised into teams with their own emblems, and compete not only in races, but online, with judges counting the most hashtags and social media activity.

“Running is a viral sport, we start running because our friends run, running is increasingly becoming a team sport,” said Godard.

When he was president, Sarkozy’s forays onto the street in running shorts were of great interest to the French.

“Is running right-wing?” the Liberation newspaper asked in a 2007 editorial, pondering the sport’s focus on performance and individualism and Renaissance humanists’ advice that one should receive a balanced physical and intellectual education.

While Amsalem said there are now 9,000 races a year in France, he admits that being sporty for individual reasons — whether fitness, weight control or wellbeing — is not particularly French.

Physical activity in French schools is “sidelined, there are often children whose parents exempt them from doing sport because they consider it is not important, that other subjects should be prioritised.”

“It is the Anglo-Saxons who have the sports culture because they have a school system which perfectly integrates sport. In France we don’t have the same culture so today it seems as if there is an shift.”

“It has become a genuine social phenomenon.”

Sports sociologist Patrick Mignon agreed that “sport in France is considered as something secondary, there is always a lot of conflict within schools to find a place for sport.”

He notes it is in the past decade that running has become an “activity of the masses” in France.

Godard from Adidas said that in the United States a key running trend was that women were now the main driver of the sport.

“They run more, they spend more,” he said.

In France the opposite is still true, with 53 percent of male runners to 47 percent of women according to the FFA study, but they are rapidly catching up.

Michelle Abbou, 55, is an accountant who began running two years ago to combat severe depression after her mother’s death.

Now a self-proclaimed addict, even she is surprised at her compatriots’ sudden propensity for working up a sweat in full view, such as along the famed shopping avenue the Champs-Elysees.

“You see runners in the street, before you would never ever see people jogging in the street… especially on the Champs-Elysees.”