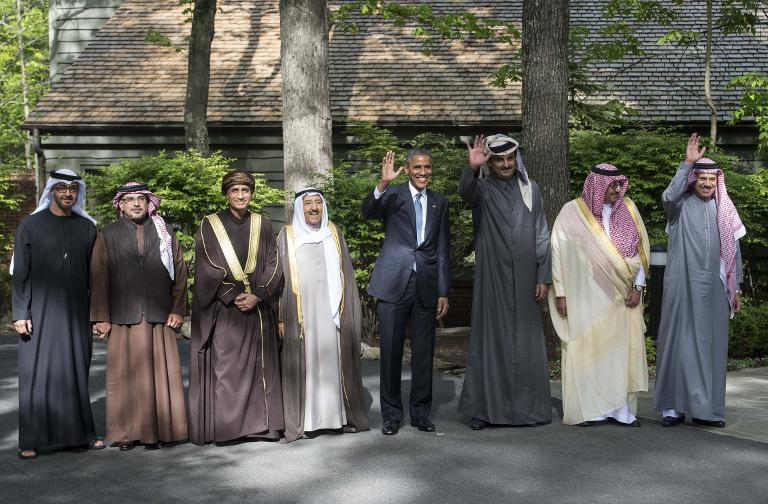 President Barack Obama tried to reassure America’s Gulf allies that engaging with Iran would not come at their expense, at a Camp David summit that proved short on concrete outcomes.

Pledging to counter external threats to Gulf states amid Iran’s growing role in the region, Obama said his security commitment to the decades-old allies was “ironclad.”

He said the United States was prepared to help “deter and confront an external threat to any GCC (Gulf Cooperation Council) state’s territorial integrity.”

But behind the warm words, there remains deep unease.

Only two out of six Gulf heads of state accepted the invitation to visit the presidential mountain retreat, in what was widely seen as a snub to the US leader.

Around the table, Obama faced the tough task of convincing skeptical emirs, princes and sheikhs that his ambition to reach a nuclear deal with Tehran will not come at their expense.

Iran stands to regain in excess of $100 billion in blocked cash if sanctions are lifted — cash the Gulf states believe could help fund the Islamic republic’s “destabilizing” activities in the region.

“Most of the destabilizing activity that Iran engages in is low-tech, low-cost activity,” Obama said, indicating that he believed Iran would be more interested in fixing its economy than bumper weapons buys.

Gulf states are not so sure, and had asked the United States to provide a written guarantee of their security.

But that suggestion has been rebuffed.

Such a pact would be difficult to pass through a pro-Israeli Congress, and the White House sees asymmetric threats and internal unease at closed political systems as a greater security priority.

The Gulf states had to settle for progress on ballistic missile defense, joint military exercises and cyber and maritime security initiatives.

But Obama also insisted that close security ties with Gulf nations were not designed to box in Iran.

“The purpose of security cooperation is not to perpetuate any long-term confrontation with Iran or even to marginalize Iran,” he said.

The Gulf states believe the United States is not doing enough to prevent what they say is Iran’s fuelling of the conflicts in Yemen, Syria and Iraq that have thrown the Middle East into deep crisis.

The assembled leaders did not have to look hard for evidence of the seriousness of their task.

Even as the leaders gathered, it emerged that Iran’s Revolutionary Guard had fired on a commercial ship off the coast of the United Arab Emirates, the Islamic State executed 26 civilians in Syria and, amid a shaky truce in Yemen, Sanaa recalled its envoy to Tehran.

The Arab and largely Sunni Muslim states also fear the nuclear deal could be a harbinger of closer US ties with their Persian and Shiite arch-foe.

Obama’s relationship with the Gulf had already been strained by his perceived quickness to welcome democratic Arab Spring revolts and a reduced dependence on Gulf oil.

The United States and the ultra-conservative Gulf monarchies have close ties that go back decades, their mutual interests trumping their vastly different national ideologies.

In 1980, in the wake of a crippling oil shock precipitated by Iran’s Islamic Revolution, then-president Jimmy Carter pledged to come to the defense of vital oil-producing Gulf states.

That policy was made manifest a decade later, when president George Bush sent troops to Kuwait when it was invaded by Saddam Hussein’s Iraq.

Today, the US Fifth Fleet is based in Bahrain and a US military command center with substantial troops is stationed in Qatar.