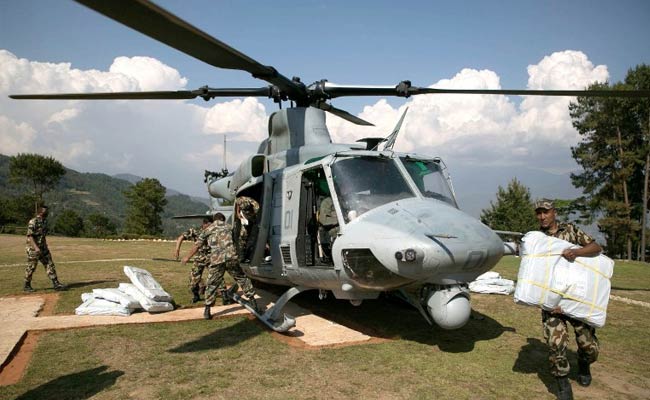 Kathmandu:Â  The wreckage of a US military helicopter that went missing with eight people on board while delivering aid in quake-hit Nepal has been found near the Chinese border, the Nepalese army said on Friday.

Major General Binoj Basnet said the helicopter, which disappeared on Tuesday, had been spotted from the air in a remote forest around 70 kilometres (40 miles) northeast of Kathmandu.

“We don’t know if there are any survivors, we have yet to confirm that,” Basnet said.

“We have sighted the wreckage from the air, we are now trying to land in the area and get more information.”

The US military said earlier that the UH-1Y Huey was carrying six US Marines and two soldiers from the Nepalese army when it went missing during a relief flight in eastern Nepal.

Relief teams from around the world have been working for weeks to provide water, food, shelter and medical assistance to Nepal after a 7.9-magnitude quake hit on April 25 quake, killing thousands and destroying more than half a million homes.

The missing helicopter was among more than a dozen US military aircraft devoted to aid operations, including two other Huey choppers and four tilt-rotor Ospreys as well as cargo planes.

Before it went missing, there was “some chatter about a fuel problem” on the radio from the helicopter crew, Pentagon spokesman Colonel Steven Warren said on Tuesday.

Army helicopters and hundreds of US and Nepalese ground troops had been deployed to scour the mountainous terrain where it disappeared on the same day a second earthquake – with magnitude of 7.3 – hit Nepal.