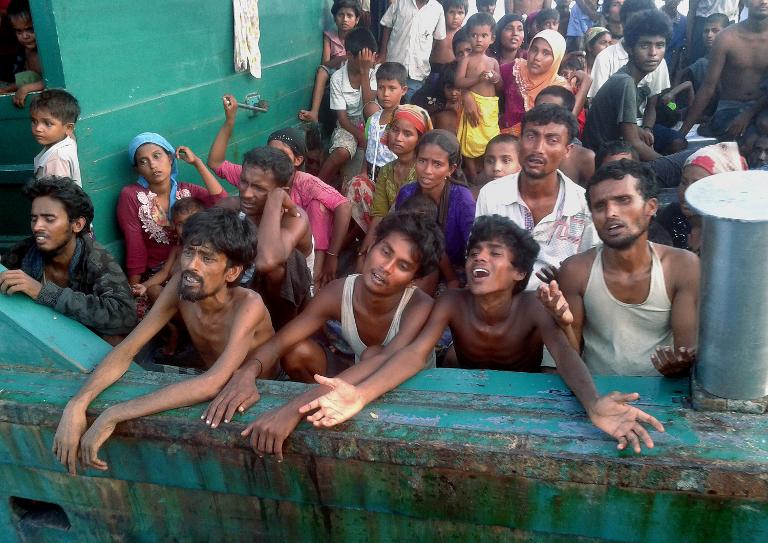 Malaysia and Indonesia have vowed to bar ships bearing migrants from Myanmar and Bangladesh from entering Southeast Asia waters, triggering warnings from UN Secretary General Ban Ki-moon and rights groups that the hardline approach could endanger thousands at sea and falls short of their international obligations.

On Thursday, a boat crammed with scores of Rohingya — a persecuted Muslim minority in Myanmar — was found drifting in Thai waters.

An AFP reporter saw one of the men eat handfuls of raw instant noodles in the water before swimming back to the boat.

“About 10 people died during the journey. We threw their bodies into the water,” one of the migrants shouted in Rohingya to a boat full of journalists.

“We have been at sea for two months. We want to go to Malaysia but we have not reached there yet.”

Many young children were among the weak-looking passengers on the wooden boat, which was found near the southern Thai island of Koh Lipe in the Andaman Sea.

Sajida, who was travelling with her four young children, said she was also trying to reach Malaysia, but the boat was set adrift by people smugglers who damaged the engine and fled.

“We haven’t had anything to eat for a week, there is nowhere to sleep… my children are sick,” the 27-year-old told AFP.

A Thai naval officer on Koh Lipe said they planned to help fix the engine “so they can go to their destination”.

The UN refugee agency and rights groups say thousands of men, women and children are believed to be stuck out at sea and at risk of starvation and illness after a Thai police crackdown disrupted well-worn people-smuggling routes.

But Malaysian patrol ships intercepted two migrant vessels beginning late Wednesday off the northern Malaysian islands of Penang and Langkawi, according to an official who spoke on condition of anonymity.

They carried a combined 600 people, the official added.

“Last night, one boat was pushed back after it entered Malaysian waters off Penang and one more boat was prevented from entering Langkawi waters,” the official said.

The boat off Langkawi may have been the same one that later turned up in Thai waters. Both carried a makeshift banner declaring the passengers as Rohingya.

Rights groups say Thailand — which has called a May 29 regional meeting on the issue — also has a policy of not allowing such boats to berth.

UN chief Ban Ki-moon on Thursday urged Southeast Asian countries not to turn back the migrants, telling them that rescue at sea was an international obligation.

In a statement, Ban voiced alarm that “some countries may be refusing entry to boats carrying refugees and migrants”.

He urged governments to “ensure that the obligation of rescue at sea is upheld” and to “keep their borders and ports open in order to help the vulnerable people who are in need”.

Washington, meanwhile, urged “countries of the region to work together to save lives at sea,” State Department spokesman Jeff Rathke said.

“The Thai, Malaysian, and Indonesian navies should stop playing a three-way game of human ping pong, and instead should work together to rescue all those on these ill-fated boats,” said Phil Robertson, deputy Asia director for Human Rights Watch.

Many of the migrants are Rohingya, who suffer state-sanctioned discrimination and have been targeted by sectarian violence in Buddhist-majority Myanmar.

More than 1.3 million Rohingya — viewed by the United Nations as one of the world’s most persecuted minorities — live in Myanmar’s western Rakhine State.

Malaysia refused to budge Thursday, with the deputy home minister putting blame for the problem squarely on the migrants’ home countries.

“Of course, there is a problem back home in Myanmar with the way they treat the Rohingya people,” Wan Junaidi Tuanku Jaafar told AFP.

“So that is why we need to send a very strong message to Myanmar that they need to treat their people with humanity. They need to be treated like humans, and cannot be so oppressive.”

He said Bangladesh also needed to do more to prevent illegal immigrants leaving its shores.