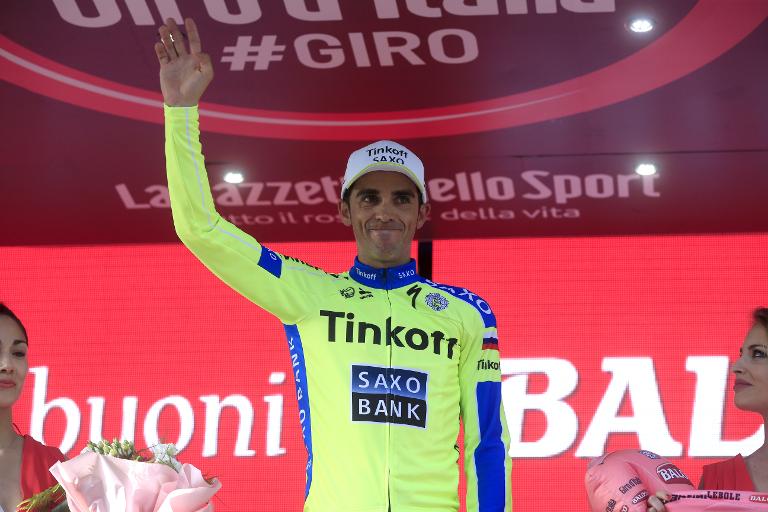 Alberto Contador’s Giro d’Italia challenge has been thrown into doubt after a crash on Thursday’s sixth stage won by Germany’s Andre Greipel left the race leader with a dislocated shoulder.

The Spaniard, who crashed during the sprint for the line but nevertheless held the overall lead, was in such pain with his left shoulder that he could not pull on the pink jersey at the victory ceremony.

“During the night he will keep his arm immobilised as doctors have advised him,” Contador’s spokesman Jacinto Vidarte told AFP.

Vidarte said that the 32-year-old, who also suffered a knee injury, was determined to continue after the crash caused by a camera-waving spectator.

“He’s going to try and start with a bandage to support his arm,” he added.

“He (Contador) said it (the knee injury) was nothing, there isn’t a lot of pain.

“Nothing is broken. It’s not a fall as serious as that at the Tour de France last year.”

Contador was forced to pull of out the Tour de France last year after fracturing his tibia, but went on to win the Vuelta.

His fall at Castiglione della Pescaia is his third this year.

Earlier Tinkoff team manager Stefano Feltrin declined to comment on the possibility that the race favourite could be forced to withdraw with Friday’s stage, the longest of this year’s race, covering 264km from Grosseto to Fiuggi, south of Rome.

Contador, the 2008 champion, is attempting to become the eighth rider to achieve the double of the Giro and the Tour de France in the same year.

He holds a two-second lead on Italy’s Fabio Aru with Sky’s Richie Porte of Australia third at 20sec in the overall standings.

Contador crashed 200 metres from the line, along with other riders who were brought down in a wave provoked by Italy’s Daniele Colli’s fall on the other side of the road, which resulted in the Nippo rider suffering a broken arm.

Colli came a cropper when he was struck by a camera zoom lens held by a spectator over the barrier, once again raising questions about security after the race was also interrupted by a collective crash on Sunday provoked by a spectator on a bicycle.

The rules state that the time differences are neutralised in case of a fall or accident in the final three kilometres, except for the summit finishes.

Lotto rider Greipel won a sprint for the line ahead of Italians Matteo Pelucchi and Sacha Modolo after the 183km ride through the Tuscan countryside.

The German champion managed to cross the line just after the fall following 4hr 19min 42sec in the saddle, to finish ahead of the pursuing Pelucchi and Modolo.

A breakaway of five riders in two groups — first Eduard Michael Grosu and Marek Rutkiewicz, and then Marco Bandiera, Alessandro Malaguti and Alan Marangoni — opened the race from the first hour.

The peloton however did not let the five build up a lead of more then five minutes and caught up 14 minutes from the line.

It was the third Giro stage win for Greipel, nicknamed the ‘Gorilla’, after 2008 and 2010, and his fourth victory of the season.

Greipel, 32, has also notched up six stage wins on the Tour de France and four on the Vuelta a Espana.

“I now have the points leader’s red jersey but it’s not my main objective. What I want is to win stages,” said Greipel, who is not among the favourites for Friday’s seventh stage which finishes with a climb.