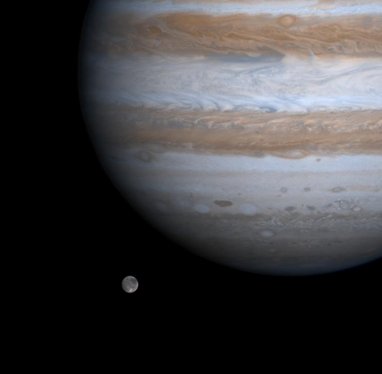 Washington: A new NASA research has suggested that the mystery dark material from Jupiter’s moon Europa was probably sea salt.

The material coating some geological features of Europa was from a subsurface ocean, discolored by exposure to radiation. The presence ofÂ sea saltÂ on the moon’s surface suggests the ocean is interacting with its rocky seafloor-an important consideration in determining whether the icy moon could support life.

Lead researcher Kevin Hand said that if it was just salt from the ocean below, that would be a simple and elegant solution for what the dark, mysterious material was.

One certainty is that Europa is bathed in radiation created byÂ Jupiter’s powerful magnetic field. Electrons and ions slam into theÂ moon’s surface with the intensity of a particle accelerator. Theories proposed to explain the nature of the dark material include this radiation as a likely part of the process that creates it.

To identify theÂ dark material, Hand and his co-author Robert Carlson, also at JPL, created a simulated patch of Europa’s surface in a laboratory test apparatus for testing possible candidate substances. For each material, they collected spectra-which are like chemical fingerprints-encoded in the light reflected by the compounds.

Hand said they named it “Europa in a can,” and the lab setup mimics conditions on Europa’s surface in terms of temperature, pressure and radiation exposure. The spectra of these materials could then be compared to those collected by spacecraft and telescopes.

The work showed that the chemical signature of radiation-baked sodium chloride was a compelling match to spacecraft data for Europa’s mystery material.

Additionally, the longer the samples were exposed to radiation, the darker the resulting color. Hand thinks scientists could use this type of color variation to help determine the ages of geologic features and material ejected from any plumes that might exist onÂ Europa.

The study is due to be published in the journal Geophysical Research Letters and is available online.Â