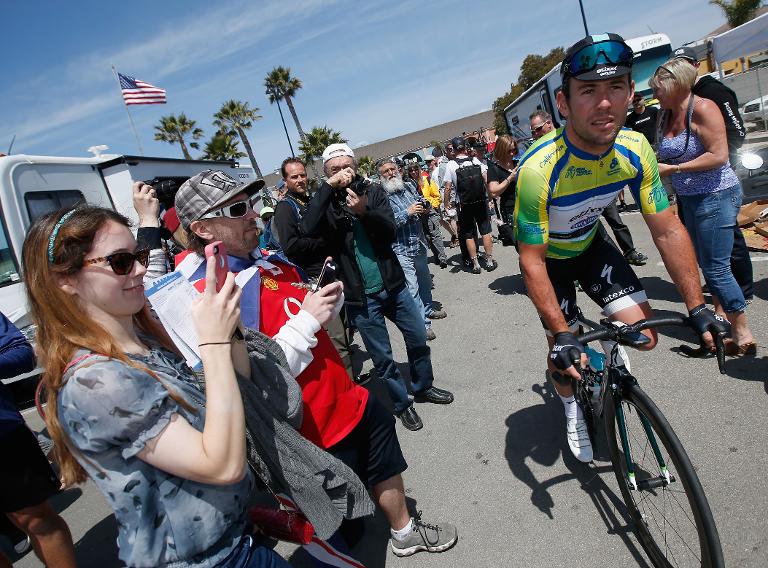 Britain’s Mark Cavendish sprinted to victory in the rainswept fifth stage of the Tour of California, his third stage win in five days of racing.

A courageous effort from BMC’s Danilo Wyss on Thursday came to nothing as the sprinters seized command in the closing meters of the 154-kilometer (95.7-mile) stage from coastal Santa Barbara to inland Santa Clarita.

Cavendish’s Etixx-Quick-Step was to the fore as the peloton poured into Santa Clarita under sometimes heavy rain, with Mark Renshaw leading out the Briton.

As Renshaw faded early in the last kilometer, Cavendish stuck to the wheel of Giant-Alpecin’s Zico Waeytens and gunned to the win.

Waeytens was second, and Slovakian Peter Sagan of Tinkoff-Saxo was third.

Hincapie Racing’s Toms Skujins of Latvia retained the overall lead going into Friday’s stage six time trial, which has been relocated from Big Bear Lake because of snow in the mountains to Santa Clarita north of Los Angeles.

But Sagan gained on Skujins, thanks to a time bonus earned in the stage, and now lies 18 seconds off the lead.

“I had Mark Renshaw at the end, and as always he was cool and calm, but we had to dig deep,” said Cavendish, who was feeling the cold as he powered into a headwind at the finish.

“Daniel Oss attacked in last kilometer, and Mark was cooked, so we couldn’t go as fast as we wanted in the end. It was a headwind finish, and I knew I didn’t want to jump early.”

Wyss was part of a five-man escape that built a gap of about three minutes on the peloton in the early stages.

“We had a good group. We were working together all day,” said Wyss, who was finally caught some three kilometers from the finish to set the stage for the sprinters.