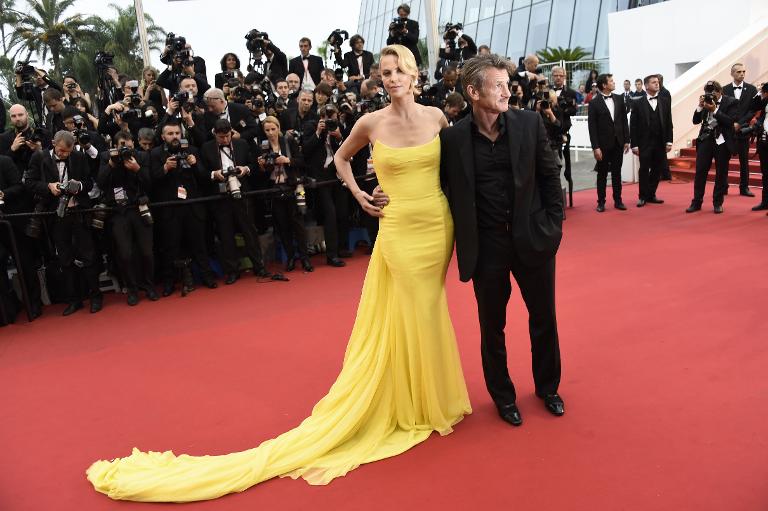 The Cannes Film Festival slipped into high gear on its second day Thursday by screening the new “Mad Max” blockbuster and starting the competition for its Palme d’Or.

The cast and director George Miller trod the red carpet for the black-tie projection, setting off a constellation of photographers’ flashes.

Theron stood out in a figure-hugging, canary yellow gown and was accompanied by her partner, actor Sean Penn, who wore all-black with no tie around his open shirt.

Although Australian-directed, “Fury Road”‘s A-list leads threw a bit of Hollywood glitter over the festival, confirming the event’s status as the premier international showcase for commercial and arthouse cinema.

The movie, which has won rave reviews for the superlative stunts and action sequences, is opening worldwide Thursday and Friday.

Rolling Stone magazine said it was a “brilliant cinematic fireball” and The Hollywood Reporter noted that director George Miller “kicks more ass, as well as all other parts of the anatomy, than any film ever made by a 70-year-old”.

“It’s like watching the Cirque du Soleil at some Led Zeppelin fetish club,” he said.

Theron rankled a little at questions suggesting she was playing as tough as the men in the movie, saying that women are capable of just as much resourcefulness as men.

It was “incredible”, the South African actress said, to play a part that “celebrates everything about being a woman”.

Miller lauded Hardy as having the same level of charisma as Mel Gibson, who shot to fame after playing Mad Max in the original 1979 movie and two sequels.

He also demurred when asked if further “Mad Max” films were in the pipeline.

“I’m just not recovered enough,” but it was possible “if we get the appetite again,” he said.

No other film to be shown at Cannes will match the “Fury Road” budget — estimated at $150 million 00 or its wide box office appeal. But the festival revels in displaying the two driving forces of cinema: business and art.

“Fury Road” fulfils the commercial side of things. Cannes’s competition for the top Palme d’Or prize takes care of the rest.

Thursday saw the first two of the 19 films in competition unspooled.

“Our Little Sister” was a gentle Japanese family drama adapted from a manga, which tells the story of three siblings who meet their orphaned teenage half-sister for the first time at their father’s funeral and invite her to live with them.

Director Hirokazu Koreeda told AFP he got so swept up reading the original manga that he had to buy the movie rights.

“I said to myself, ‘I know someone else is going to make a film out of it’. And so I thought, I would prefer it be me and no one but me,” he said.

The second competition entry was “Tale of Tales”, an Italian-directed movie shot in English with an international cast including Salma Hayek and Vincent Cassel.

Critics gave warm reviews to the fantasy film, which brought together three fairytales inspired by 17th-century poet Giambattista Basile and mixed them into a baroque, bloody compilation.

“The key to the film is desire which becomes obsession and creates conflicts,” director Matteo Garrone told a news conference.