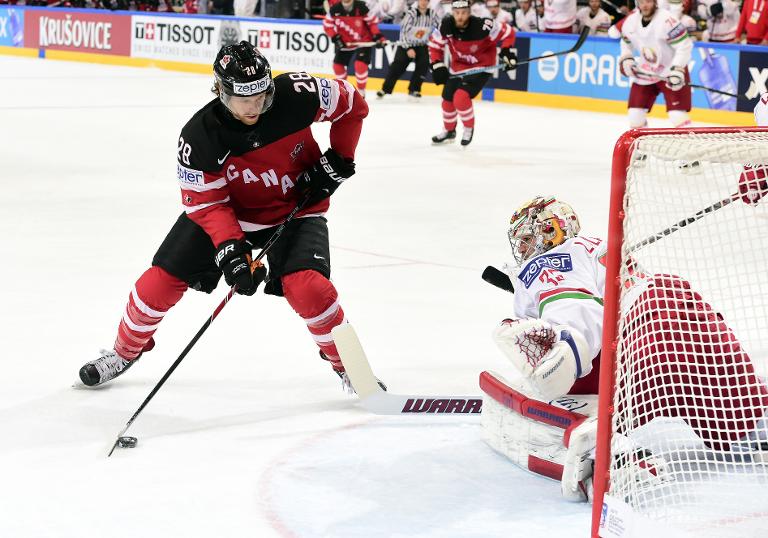 Canada swept aside Belarus 9-0 as Dallas forward Tyler Seguin helped himself to a hat-trick in the ice hockey world championship quarter-finals on Thursday.

They joined the United States, Russia and the Czech Republic in Saturday’s semi-finals after the Americans had earlier come from behind to down Switzerland 3-1 while Russia saw off Sweden 5-3 and the Czechs beat Finland 5-3.

Reaching their first semi-final at the tournament since 2009, Canada trashed hapless Belarus for their eighth win in as many games as they bid for their first world title since 2007.

San Jose defenceman Brent Burns opened the score 27 seconds into the game and Tyler Ennis, Ryan O’Reilly and Seguin made it 4-0 before the end of the first period.

Olympic champions from 2010 and 2014, Canada continued to dominate the game in the second period, with Seguin and Burns adding their second goals of the day.

Seguin completed his hat-trick on 51 minutes, O’Reilly scored his second and Jason Spezza rounded off the scoring in the final period as Canada peppered Canadian-born Kevin Lalande in the Belarussian goal with 50 shots.

“Someone is blessing me in this arena,” said Seguin, who also scored his first NHL goal against Phoenix in Prague in 2010.

“We won by a margin because we kept playing our game,” he added.

“The way we played in the first, coming after them, that’s the way we need to play,” said Canada captain Sidney Crosby.

“It was good to get the first one and get some momentum early,” added the Pittsburgh star.

On Saturday, Canada will face the Czech Republic who beat Finland thanks to two goals and an assist by Florida veteran Jaromir Jagr.

Czech center Jan Kovar scored first but Tuomo Ruutu put Finland level on 18 minutes and Jussi Jokinen handed them a lead early into the second period, but his Florida teammate Jagr levelled the score and then fed Kovar for a power-play goal.

Another Florida forward Aleksander Barkov made it 3-3 on 45 minutes, but ten minutes later Jagr grabbed a loose puck behind the Finnish goal, skated out in front of it and beat Nashville goalie Pekka Rinne.

Vladimir Sobotka then scored into an empty net to round off the score.

In the opening quarter-final in the eastern Czech city of Ostrava, Group B winners the USA came back from 1-0 down to beat Switzerland 3-1.

Nashville defenceman Roman Josi put Switzerland ahead on 14 minutes as he grabbed the puck in the Swiss defending zone and cut through the stunned US defence to beat Connor Hellebuyck in the US goal.

But the US team came back within a minute midway through the game with goals by Ben Smith and Charlie Coyle before Toronto defenceman Jake Gardiner made it 3-1 on 51 minutes.

In the second quarter-final in Ostrava, Sweden managed to come back from 3-0 down but in the end lost 5-3 to defending champions Russia led by Pittsburgh star Evgeni Malkin who scored twice and added an assist.

Sergei Mozyakin scored in a five-on-three power play, Sergei Shirokov added another 16 minutes into the game and Malkin put Russia 3-0 ahead with a breakaway goal just after the first intermission.

Sweden came back with goals by John Klingberg, Anton Lander and Loui Eriksson between the 32nd and 55th minutes, but Malkin dashed their hopes with the game winner half a minute after the equalizer.

The final is scheduled for Sunday.