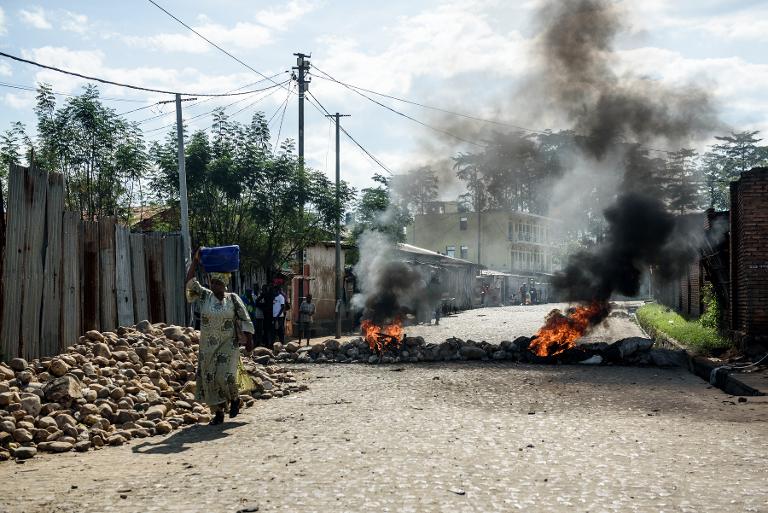 The attempt to overthrow Burundian President Pierre Nkurunziza has failed, a deputy coup leader said Thursday, after a day of fierce fighting between rival army factions.

“Personally, I recognise that our movement has failed,” General Cyrille Ndayirukiye told AFP.

“We were faced with an overpowering military determination to support the system in power.”

The admission of failure came shortly after the presidency announced that Nkurunziza — who was abroad when the coup was declared — had returned to his country.

He was in neighbouring Tanzania for regional talks Wednesday when powerful general Godefroid Niyombare launched the coup, in a culmination of weeks of violent street protests against the president’s bid to seek a third term.

“President Pierre Nkurunziza is now in Burundi,” his senior communications advisor Willy Nyamitwe told AFP. “That’s all we can say for now because of security reasons.”

While the president’s return could not be independently verified, a source close to him said the head of state “will sleep in Ngozi in his home province tonight”.

The coup attempt had raised fears of a return to widespread violence in the impoverished country, which is still recovering from a 13-year civil war that ended in 2006 and left hundreds of thousands dead.

Earlier Thursday, loyalist troops said they had fought off two major attacks by rival soldiers in an intense battle for control over the strategically important state radio office.

The bodies of three soldiers were seen by an AFP journalist lying in the street near the scene of the clashes.

By mid-afternoon, station director Jerome Nzokirantevye said it was “loyalist soldiers who are in control”.

The United Nations Security Council, in emergency talks on the crisis, called for an end to the violence and “the holding of credible elections” while separately, UN Secretary-General Ban Ki-moon condemned “attempts to oust elected governments by military force” and urged calm.

AFP reporters in the Burundian capital said the crackle of automatic weapons fire and the thump of explosions could be heard throughout the night Wednesday, intensifying around dawn before subsiding again later.

For much of the day the streets were largely deserted by civilians as sporadic clashes could be heard in other parts of the city, while plumes of smoke were seen on the city skyline.

Both sides at different times claimed to control the streets, adding to the confusion over the outcome of the coup, but by Thursday night the uprising appeared to have been crushed.

A senior police official said the pro-coup troops were “in disarray” after their assault on the RTNB state television and radio complex in the capital was repelled.

“Some rebels have already surrendered. Others are fleeing,” he said.

The fight for RTNB was seen as crucial to control the flow of information as Burundi’s main private radio stations and the largest independent television channel were no longer broadcasting. The influential African Public Radio station was even set ablaze after being hit by a rocket.

General Ndayirukiye said the attempted coup, “even if it has failed,” had shown that there were forces within the army “subservient to the ruling party”.

Asked whether the pro-coup troops would surrender or make a last stand, he said: “We have thought about it but we don’t want to be responsible for leading those who have followed us to their deaths.”

He added that Niyombare and other senior figures involved in the coup attempt were by his side as he was speaking to AFP.

Opposition and rights groups insist that it is unconstitutional for Nkurunziza, who has been in office since 2005, to run for more than two terms. The president, however, argues his first term did not count as he was elected by parliament, not directly by the people.

More than 25 people have been killed and scores wounded since late April, when Burundi’s ruling CNDD-FDD party — which has been accused of intimidating the opposition and arming its own militia — nominated Nkurunziza to stand for re-election in June 26 polls.

It remains unclear, however, how many have died since the launch of the coup.

Resident Onasphore Ndayishimiye was one of the few who dared venture out on Thursday, but said he had narrowly avoided being shot.

“The police saw me and shot at me. I put my hands up and dived on the ground,” said Ndayishimiye, who was unharmed but shaken.

In his message announcing the coup, Niyombare signalled he did not want to take power himself, vowing to form a “committee for the restoration of national harmony” and work for “the resumption of the electoral process in a peaceful and fair environment”.

Asked to decide on the issue of a third term, Burundi’s constitutional court found in the president’s favour, but not before one of the judges fled the country claiming its members were subject to death threats.