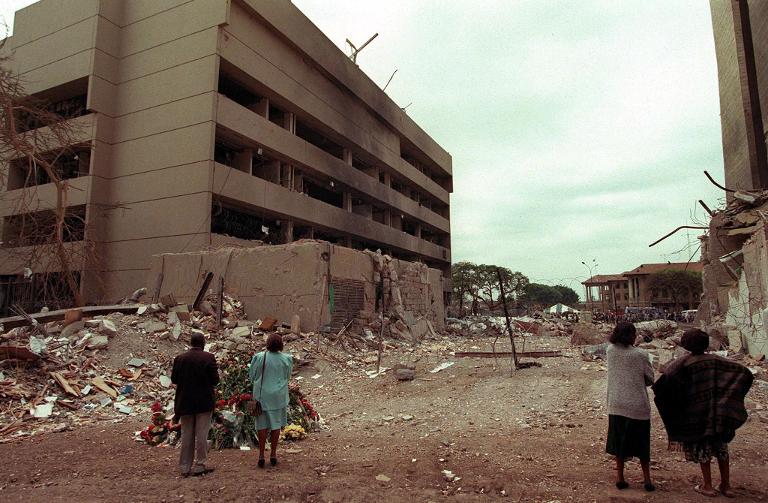 A New York court sentenced Saudi exile Khalid al-Fawwaz to life in prison Friday over his role in the 1998 Al-Qaeda bombings of US embassies in East Africa which killed 224 people.

Fawwaz, a 52-year-old described in court as one of late Al-Qaeda leader Osama bin Laden’s most trusted lieutenants, was convicted in February after a five-week trial.

The August 7, 1998 bombings of the US embassies in Nairobi and Dar es Salaam, which wounded more than 5,000 people, marked the first major attacks in Al-Qaeda’s war against the United States.

Federal Judge Lewis Kaplan handed down the life sentence against Fawwaz, who was found guilty on four counts of conspiracy to kill Americans and destroy property.

Arrested in London in September 1998, he has already spent 16 years in custody, most of it fighting extradition to the United States.

US Attorney Preet Bharara said Fawwaz “was one of Osama bin Laden’s original and most trusted lieutenants.”

Fawwaz, he said, was ninth on the list of Al-Qaeda’s original 107 members.

He headed one of the original Al-Qaeda training camps in the mountains of Afghanistan, led a terrorist cell in Kenya, and spent years shaping and disseminating Al-Qaeda’s message from London, including bin Laden’s 1998 fatwa exhorting supporters to kill Americans around the world, the prosecutor said.

“Fawwaz conspired with a murderous regime, and the result was a horrific toll of terror and death. The price he will pay, appropriately severe as it is, cannot possibly compensate his victims and their families,” Bharara said in a statement.

Defense lawyer Bobbi Sternheim, in contrast, described her client during his trial as nothing more than a “calm and serene” man who dedicated his life to peaceful reform in his homeland.

She claimed he had never shared the violent views of bin Laden and Al-Qaeda, was never a member of Al-Qaeda and was only interested in fighting corruption in Saudi Arabia.