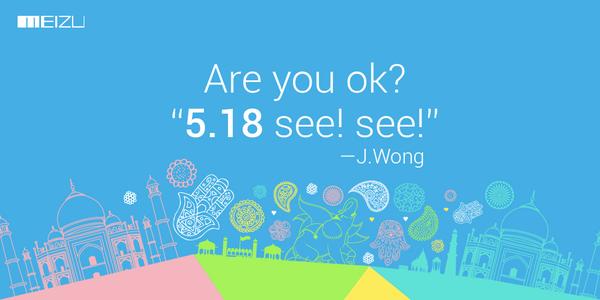 New Delhi: After Xiaomi, another China-based tech company, Meizu, seems to be all set to enter the Indian smartphone market.

While the company has not yet made any clear announcement regarding its foray into India, its recent tweet and Facebook post hint at the company’s India debut on May 18.

The image tweeted by the company from its @Meizu_India Twitter account says, “We’ve heard you and here is the date. #0518“.

The image in the tweet, however, conveys the same meaning, but it also takes a dig at rival Xiaomi with the words “Are You ok?”

These words uttered by Xiaomi CEO Lei Jun had generated much online amusement. Lei Jun was making an earnest attempt to deliver a speech in English during the Xiaomi Mi 4i product launch in India last month.

While there is no information as to what Meizu has up it sleeves for the Indian market, but it is expected that the company will unveil the Meizu M1 Note on May 18 in India. The phone features a 5.5-inch IPS FHD display, 1.7GHz octa-core MediaTek MT6752 processor, 2GB RAM, 13 megapixel rear camera and a 5 megapixel front camera.

The Meizu Mi Note is reminiscent of the iPhone 5c and comes in similar shades.