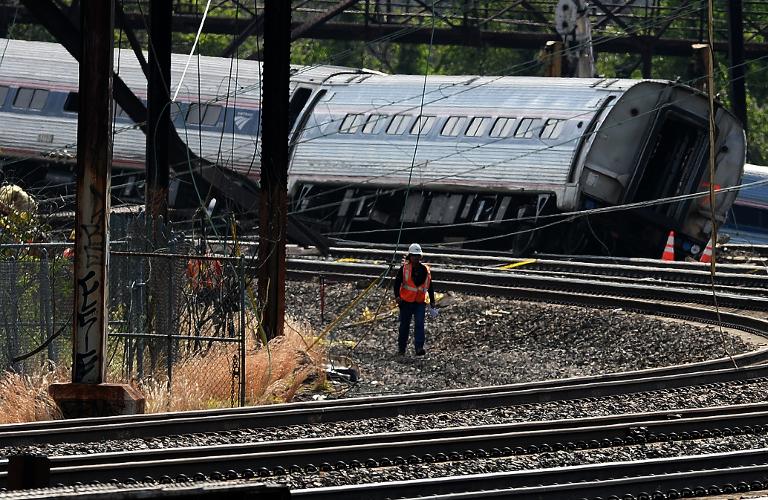 The engineer of a US passenger train traveling at more than 100 miles per hour slammed on the emergency brakes just before it derailed in Philadelphia, leaving at least seven people dead, investigators said Wednesday.

The speed was more than twice the approved limit, and the brakes barely slowed the train before the cars tumbled off the track late Tuesday, leaving more than 200 people injured, some with broken ribs and collapsed lungs.

The National Transportation Safety Board cautioned that its first assessment of the data was preliminary, and that it would need more time to piece together what happened to Amtrak Train 188, headed from Washington to New York.

Experts were at the scene searching for evidence, and the locomotive and train cars were being moved to a secure location for analysis. The initial information came in part from the train’s “black box” data recorders.

“Our mission is to find out not only what happened, but why it happened, so that we can prevent it from happening again,” the NTSB’s Robert Sumwalt told reporters, saying his team would be on the ground for a week.

The engineer’s “full emergency brake application” only slowed the train speed from 106 miles (170 kilometers) per hour to 102 mph, Sumwalt said, noting: “It takes a long time and distance to decelerate a train.”

The speed limit entering the curve was just 50 miles per hour.

He said a speed control system used along Amtrak’s well-traveled Northeast Corridor between Washington and New York was not yet in place in the area of the crash.

“We feel that had such a system been installed in this section of track, this accident would not have occurred,” he said.

Officials warned some of the 243 passengers and crew listed on the train’s manifest — many of whom limped away from the wreck bloodied and dazed — had not yet been accounted for, meaning the death toll could still rise.

They encouraged anyone who may have left the scene without being counted to contact Amtrak.

Sam Phillips, the city’s director of emergency management, said area hospitals had treated “over 200 patients last night and this morning.”

Herbert Cushing, the chief medical officer at Temple University Hospital, said some suffered rib fractures or collapsed lungs. Some of the victims hailed from Spain, Belgium, Germany and India.

Reportedly among the dead were a staffer for the Associated Press and a midshipman at the US Naval Academy, according to the AP and the Washington Post.

Witnesses described scenes of panic and chaos, as train cars tumbled over, sending passengers banging into one another and luggage flying.

One car was completely flattened in the crash, which took place at about 9:30 pm Tuesday (0130 GMT Wednesday). Wheels lay scattered by the tracks.

“It looked like an episode from ‘The Walking Dead,'” Washington said.

Other passengers had to kick out windows to escape, according to former Pennsylvania congressman Patrick Murphy, who was aboard the train.

Philadelphia mayor Michael Nutter said rail service between the city and New York would likely be suspended for the rest of the week.

“The victims could have been any one of our parents, children, or someone from one of our communities,” said Vice President Joe Biden, who often rides on the popular commuter line between Washington and his home state Delaware.

“Amtrak is like a second family to me, as it is for so many other passengers.”