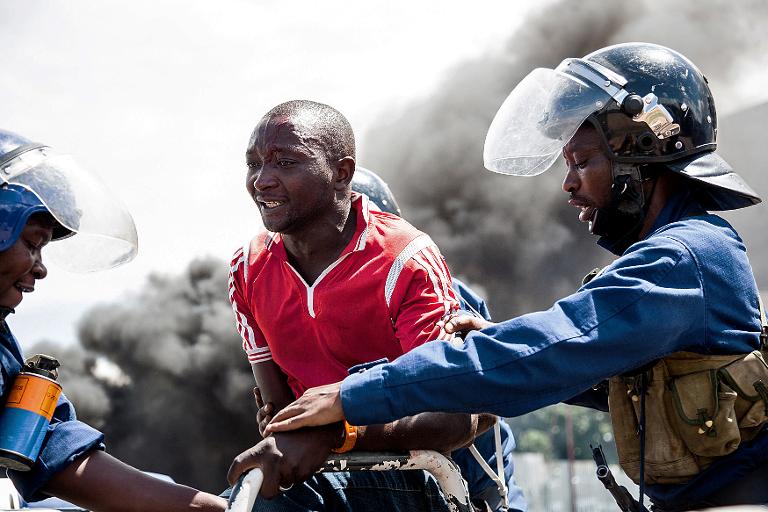 A top Burundian general launched a coup attempt against President Pierre Nkurunziza on Wednesday, capping weeks of violent protests against the leader’s controversial bid for a third term.

General Godefroid Niyombare, a former intelligence chief who was sacked earlier this year, announced via a private radio station that the president had been overthrown hours after he left for neighbouring Tanzania for regional talks.

The general also ordered the closure of Bujumbura airport and the landlocked central African nation’s borders, declaring that he had the support of “many” high-ranking army and police officials.

Hundreds of people took to the streets in celebration after the coup announcement, shouting “Victory!” and sounding car horns. Cheering crowds were also seen walking alongside marching soldiers and climbing aboard tanks in the lakeside capital.

But by late Wednesday the outcome of the putsch was still uncertain, with the presidency dismissing what it said was an “imaginary coup” and vowing the perpetrators would be brought to justice.

“I think there is some confusion, I think things will become clear tomorrow,” General Niyombare told France 24 television, insisting there had been “no other option” but to declare a coup.

A senior military officer, speaking on condition of anonymity, told AFP that negotiations were ongoing between army factions for and against the coup.

“Both sides are committed to finding a compromise before dawn and announcing it to the population to avoid confusion and prevent things from escalating tomorrow,” the source said.

Pro-Nkurunziza troops appeared to still be in control of key institutions, including the presidential palace and state broadcaster, an AFP correspondent and witnesses said. Troops earlier fired warning shots to stop demonstrators from marching on the television and radio building.

The Tanzanian government said Nkurunziza was flying back home, although his exact whereabouts on Wednesday night were unclear — amid speculation he may have travelled to a third country elsewhere in the region.

An AFP correspondent confirmed the airport in the Burundian capital had been shut and appeared to be in the hands of pro-coup forces.

Ugandan government officials contacted by AFP refused to confirm or deny speculation that Nkurunziza may have flown there instead.

The attempted coup sparked international alarm, with Washington urging Burundians to “lay down arms, end the violence and show restraint”.

Those calls were echoed by the European Union which warned it was “essential the situation does not spin out of control”.

United Nations Secretary-General Ban Ki-moon also made an urgent appeal for calm, while the UN Security Council said it would hold an emergency meeting on the situation on Thursday.

– Fears of return to civil war –

In his message announcing the coup, Niyombare signalled he did not want to take power himself.

“President Pierre Nkurunziza is removed from office, the government is dissolved,” Niyombare said in the dramatic broadcast on the Insaganiro radio station.

“All people are asked to respect the lives and property of others,” said the general, vowing to form a “committee for the restoration of national harmony” and work for “the resumption of the electoral process in a peaceful and fair environment.”

Over 20 people have been killed and scores wounded since late April, when Burundi’s ruling CNDD-FDD party — which has been accused of intimidating the opposition and arming its own militia — nominated Nkurunziza to stand for re-election in June 26 polls.

Clashes between protesters and police early Wednesday, before the coup was announced, left two civilians and a police officer dead, according to the Burundian Red Cross. At least 66 people were injured, it added.

The unrest has raised fears of a return to widespread violence in the impoverished country, which is still recovering from a brutal 13-year civil war that ended in 2006. Hundreds of thousands of people were killed in the conflict.

Opposition and rights groups insist that it is unconstitutional for Nkurunziza, who has been in office since 2005, to run for more than two terms. He argues that his first presidential term did not count as he was elected by parliament, not directly by the people.

Asked to rule on the issue, Burundi’s constitutional court found in his favour but not before one of the judges fled the country, claiming its members were subject to death threats.

The African Union, EU and United States have condemned the third-term bid by Nkurunziza, a former rebel leader from the Hutu majority and born-again Christian, who believes he ascended to the presidency with divine backing.

Nkurunziza had left Burundi earlier Wednesday for Dar-es-Salaam in Tanzania, where he had been scheduled to meet with leaders of the five-nation East African Community (EAC) — made up of Kenya, Rwanda, Tanzania and Uganda as well as Burundi.

Nkurunziza did not take part in the talks. EAC leaders later issued a statement condemning the attempted coup and urging a postponement of Burundi’s elections.

Meanwhile, Burundi’s highly respected independent African Public Radio — which was shut down at the start of the protests — went back on air.