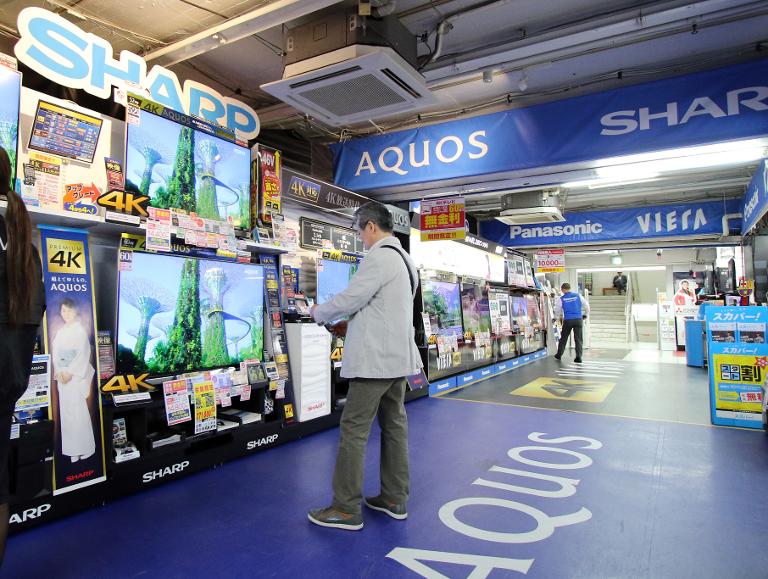 Japanese electronics giant Sharp on Thursday said it was cutting thousands of jobs in a fresh turnaround plan to keep it afloat as the struggling firm posted a bigger-than-expected $1.86 billion annual loss.

The 222 billion yen net loss — much bigger than an earlier 30 billion yen forecast — came as Sharp said it would cut about 10 percent of its 49,000-strong global workforce, including 3,500 jobs in Japan.

The firm said it hoped to swing to an 80 billion yen operating profit in the current fiscal year, but it did not give a net profit forecast.

The embattled Aquos-brand maker said it would sell the building that houses its Osaka headquarters to raise cash, roll out unspecified pay cuts, and launch a drastic capital reduction plan to wipe away huge losses.

Sharp — a major Apple supplier and leader in screens for smartphones and tablets — also said it would issue 200 billion yen worth of new shares with no voting rights to Mizuho Bank and Bank of Tokyo-Mitsubishi UFJ as part of its bid to repair a badly damaged balance sheet.

“By implementing these structural reforms, we believe we can see a concrete path toward recovery.”

On Monday, the company lost more than a quarter of its market value following reports that it was planning a drastic capital reduction and the sale of preferred shares, spooking investors who worried about their holdings being diluted.

The stock lost 0.99 percent to close at 200.0 yen on Thursday in Tokyo, before its results were released.

Sharp, like rivals Sony and Panasonic, has been working to move past years of gaping deficits, partly caused by steep losses in its television unit, which has been hammered by competition from lower-cost rivals particularly in South Korea and Taiwan.

The trio have launched huge restructuring plans with Panasonic emerging as the leader as it focuses less on consumer products and more on goods sold to other businesses.

Sony, by contrast, booked a $1.1 billion annual loss, but said it expects to swing back to profitability in the current fiscal year as it emerges from a painful corporate makeover.