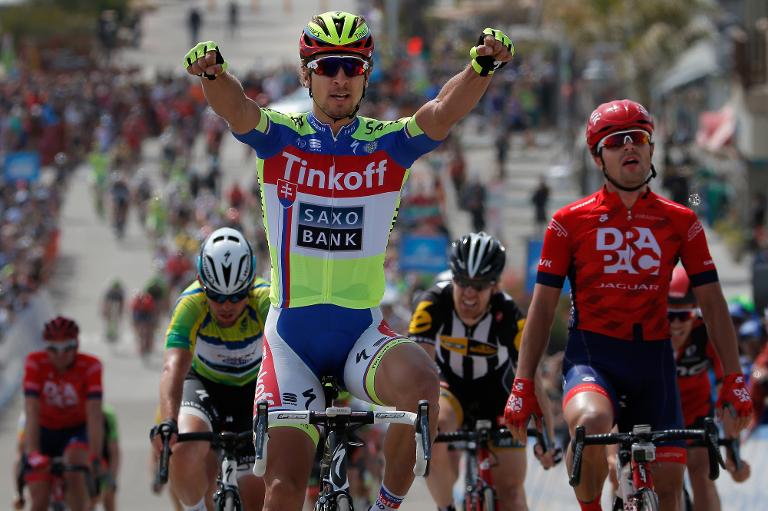 Slovakia’s Peter Sagan snatched a narrow victory in the fourth stage of the Tour of California after near-misses for the Tinkoff-Saxo rider on the first three days.

“I never looked back,” Sagan said after he burst out of a disorganized peloton and sprinted for the win ahead of Drapac’s Wouter Wippert, with Etixx Quick-Step’s Mark Cavendish third.

Hincapie Racing’s Toms Skujins finished safely to maintain the overall lead he grabbed with his stage-three win on Tuesday — 22 seconds ahead of Sagan in the general classification. Sagan earned 10 bonus seconds for Wednesday’s win.

He built a gap going into the final turns, but as the chasing bunch exited a last left-hand corner, Sagan stormed forward, powering past for the win.

The stage victory comes in the wake of comments by team owner Oleg Tinkov that Sagan, signed prior to this season, seemed to have “lost something.”

The Slovakian declined to be drawn into discussing those remarks, preferring to focus on the day’s performance.

“I was just in the group, and I trust my teammate,” Sagan said. “He brought me on the front for the last corner left. Also, Mark Cavendish was behind me, maybe I did some turns better, and from the last corner I just sprinted. I’m very happy.”

Latvia’s Skujins was pleased with his team’s effort in defense of the yellow jersey.

“It was pretty big for us,” he said. “It was pretty hard because it was windy, but we kept it in check, and Quick-Step did a lot of work for us, which was awesome. It worked out for us, so all is well.”

Friday’s stage six is a time trial at Big Bear Lake, where a late-season storm is forecast to drop several inches of snow starting on Thursday.