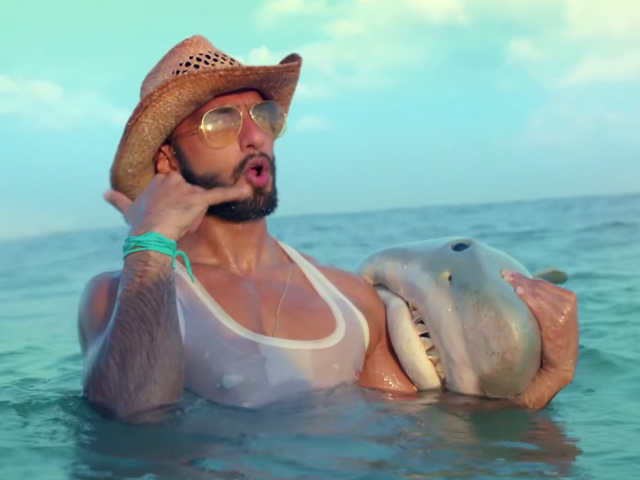 New Delhi: Bollywood actor Ranveer Singh is known for his flamboyance and pranks and has never shied away from cracking a joke in public.

From getting candid with BFF Arjun Kapoor on several occasions to stealing kisses in public, Ranveer is one of the most fun-loving actors who has a love-hate relationship with controversies.

But it seems that the actor is in fresh trouble for ‘beating up’ a fake shark in a Rupa Frontline advertisement has got the People for the Ethical Treatment of Animals (PETA) up in arms.Â

PETA plans to take the matter forward by writing to the actor and the brand.

In the advertisement, the â€˜Gundayâ€™ actor can be seen trying to impress a girl and diving into the ocean to save her from a shark. He is later seen thrashing the shark.

â€œPETA will be writing to Rupa Frontline and Ranveer to share our concerns on behalf of sharks and today’s socially aware youth,” Poorva Joshipura, PETA India CEO, said in a statement.

The animal rights organisation also condemned the gesture of using an animal to woo someone.

“By recruiting Ranveer Singh, Rupa Frontline is desperately trying to attract youth, but nothing shows how utterly out of touch with youngsters the company actually is than its depiction of cruelty to animals in its advertisement. There is nothing sexy about pretending to beat up an animal, and nothing that may disgust a girl more.

â€œThe ‘ruthless killers’ in the human-shark relationship are actually the humans. Recent studies indicate that up to 73 million sharks are killed each year, mainly for their fins, which are put in soups and eaten mostly in Asia. India is the second largest shark fishing nation in the world,â€ Joshipura added.

The last time that Bollywood displeased PETA was when it objected to the Bull Run scene in 2011 film ‘Zindagi Na Milegi Dobara’.