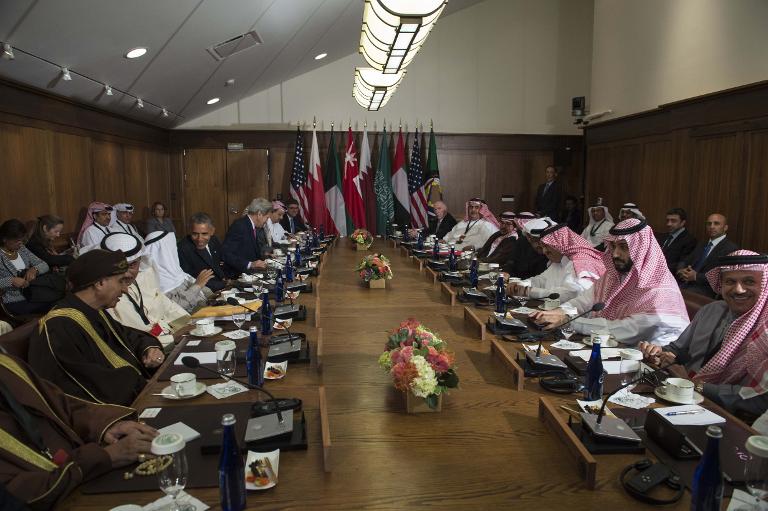 Barack Obama whisked six Gulf leaders away to his Camp David presidential retreat Thursday, for a fence-mending summit bedeviled by disagreements, royal no-shows and raging crises in the Middle East.

The bucolic Catoctin mountain getaway, synonymous with Middle East peacemaking during the presidencies of Jimmy Carter and Bill Clinton, is once again a venue for attempts at reconciliation.

President Obama faces the tough task of convincing assorted emirs, princes and sheikhs that his willingness to negotiate with their foe Iran does not represent a pivot away from Washington’s long-standing allies.

To go through the details of nuclear talks with Iran, Obama brought along his secretaries of treasury, state, energy as well as CIA director — and former Riyadh station chief — John Brennan.

But it is the broader picture that worries those on the other side of the table.

The Gulf states believe the United States is not doing enough to prevent what they say is Iran’s fuelling of the conflicts in Yemen, Syria and Iraq that have thrown the Middle East into deep crisis.

The assembled leaders did not have to look hard for evidence of the seriousness of their task.

As Marine One touched down, it emerged that Iran’s Revolutionary Guard had fired on a commercial ship off the coast of the United Arab Emirates, the Islamic State executed 26 civilians in Syria and — amid a shaky truce in Yemen — Sanaa recalled its envoy to Tehran.

On Wednesday, as a warm-up before the meeting, Obama wooed two powerful Saudi princes to the Oval Office, where he lauded “an extraordinary friendship and relationship.”

“We are continuing to build that relationship during a very challenging time,” Obama said, a nod to conflagrations in Yemen, Syria and Iraq that have reverberated across the Middle East.

But conspicuous in his absence was Saudi leader King Salman, who refused to attend, in what was widely seen as a diplomatic snub, despite Riyadh and Washington’s insistence it was not.

Five other Gulf leaders — but only two heads of state, those from Qatar and Kuwait — later arrived at the White House for a closed-door dinner and will also travel to Camp David.

Obama’s warm words belied deep malaise over Iran, in a relationship already strained by his perceived quickness to welcome democratic Arab Spring revolts and a reduced dependence on Gulf oil.

The Arab and largely Sunni Muslim states suspect Obama’s nuclear deal with Tehran is a harbinger of a bigger role for their Persian and Shiite arch-foe.

The Gulf states will be seeking assurances from Obama that he is ready to push back against Iranian proxies, particularly in Syria where Obama has been reluctant to act, even if it causes turbulence in sensitive nuclear talks.

They will also want assurances the nuclear deal does not represent a broader “grand bargain” with Iran.

“What they fear, above all, is that, for one reason or another, American policy is beginning to tilt towards Tehran and away from traditional US allies in the region,” said Hussein Ibish of the Arab Gulf States Institute.

The United States and the ultra-conservative Gulf monarchies have close ties that go back decades, their mutual interests trumping their vastly different national ideologies.

In 1980, in the wake of a crippling oil shock precipitated by Iran’s Islamic Revolution, President Carter pledged to come to the defense of vital oil-producing Gulf states.

That policy was made manifest a decade later when president George Bush sent troops to Kuwait when it was invaded by Saddam Hussein’s Iraq.

Today the US Fifth Fleet is based in Bahrain and a US military command center with substantial troops is stationed in Qatar.

But the Gulf states are now asking for the “Carter Doctrine” to become more than a gentlemanâ€™s agreement.

With one eye on the $100 billion-plus windfall that Iran could receive when sanctions end and accounts are unfrozen, they would like to see a binding mutual defense treaty like that agreed between NATO members.

Such a pact would be difficult to pass through a pro-Israeli Congress, but in any case it is a non-starter for the White House, which sees asymmetric threats and internal unease at closed political systems as a greater security priority.

With reduced attendance and hoped-for deals on security and the sale of advanced US weapons like the F-35 stealth fighter in doubt, Obama will have to scramble to salvage the summit.