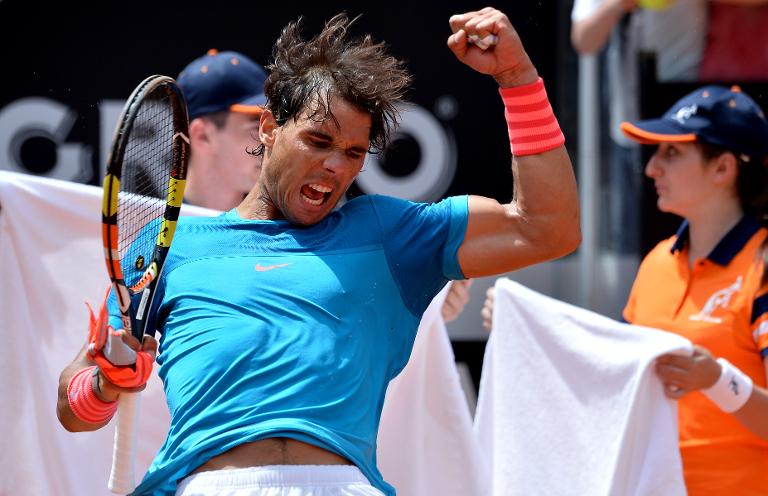 Number four seed Rafael Nadal admitted suffering from the Real Madrid blues as he advanced to the quarter-finals of the Italian Open on Thursday with a straight-sets win over American John Isner.

Nadal came into the event looking to make amends for his defeat to Andy Murray in the final of the Madrid Masters last week, when the Scot took his victory streak to a remarkable 10 wins out of 10 on clay this season.

The Spaniard’s hopes of seeing his beloved Real Madrid go all the way in the Champions League, however, were kept in check when the record 10-time champions were ousted from the semi-finals of the competition by Juventus on Wednesday.

While Nadal now meets Swiss Stan Wawrinka, who beat Dominic Thiem 7-6 (6/3), 6-4, for a place in the semi-finals, he admits — at least publicly — he will be sitting on the fence when Real’s arch-rivals Barcelona take on Juventus in the June 6 final of Europe’s premier club competition in Berlin.

“I’ve lost a lot of times, and Real Madrid lost yesterday. That’s just part and parcel of sport,” said the Spaniard, who beat Isner 6-4, 6-4 to extend his winning streak over the tall, big-serving American to 6-0.

“I have a good friend at Juventus in Fernando Llorente – I will be happy for him – and also Alvaro Morata.

“At the end of the day, if Barcelona win I will be happy for them, but if Juventus win I will also be happy because I have friends there as well.”

In the meantime, Nadal said he was happy with his game but said he was not “consistent enough” to be considered the main favourite for the French Open next month, when he will be bidding for a record 10th title in Paris.

“I’m more than happy, I think I played a fantastic match against a very, very tough opponent,” said Nadal.

“I (defended) well from the baseline, I played with not many mistakes and tried to go for points when I had a chance.

“I recovered tough balls, had good movement and a few very good passing shots. That is very good for my confidence, too. In general, I think I played very well.

“It seems like now I’m having more good days than bad days. The past few months have been on and off.”

Nadal has won the French Open at Roland Garros nine times but said his form on the red dirt so far this season means he won’t be the bookies’ favourite.

He added: “This year for sure I haven’t been consistent enough to be considered the main favourite for Roland Garros.

“Let’s see how I finish this week and then we can start to think about Roland Garros.”

Nadal is bidding for his eighth Rome title and, following last week’s defeat to Murray, said he is taking nothing for granted in Friday’s last eight clash against Wawrinka.

He said in the past three weeks, “I played 11 very good matches and two bad matches, I am very happy for that.

“Let’s try my best tomorrow. It’s another opportunity to confirm my positive feelings.”