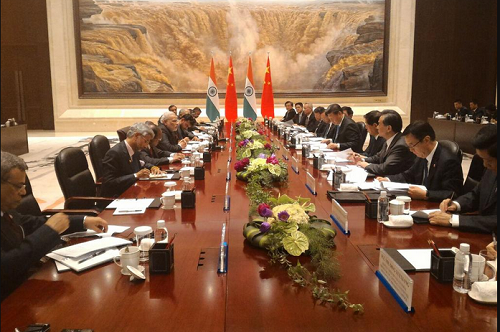 In a major departure from protocol by the Chinese leadership, Prime Minister Narendra Modi became the first world leader to be hosted outside Beijing, at President Xi Jinping’s hometown of Xi’an.

President Xi warmly welcomed the PM at the Shaanxi Guest House as the two leaders shook hands for photographs. In his opening remarks, PM Modi, wearing a black bandhgala suit, expressed his appreciation for the President’s gesture. “This is an honour to 125 crore Indians whom I am representing as Prime Minister,” he said.

Last year, when President Xi visited India, he met with the PM in his home state of Gujarat, an encounter that was referred to today.Â  “You received me very warmly in your hometown. I am very glad to receive you in my hometown,” said the Chinese leader.Â  Â

While PM Modi spoke in Hindi, President Xi made his remarks in Chinese.

The day was certainly high on ceremony and colour – the PM visited the Terracotta Warriors Museum striking poses with the statues there, a temple and then the famous Wild Goose Pagoda with President Xi.

Their talks lasted an hour and covered a series of irritant issues for both sides, including the simmering border dispute and India’s objections to China issuing visas as stapled pages instead of stamping them inside the passports of applicants from Arunachal Pradesh, which Beijing claims as disputed territory.

Foreign Secretary S Jaishankar said, “It was very substantive and I would say the atmosphere was very comfortable, so in a sense it was building on the chemistry between the two of them that started last September. On the political side, there was a lot of discussion on strengthening trust and increasing convergence. Political issues were discussed, boundary issues were discussed, including peace and tranquility on the border.

The focus now shifts to Beijing tomorrow where the PM ‘S talks are expected to yield trade agreements worth $10 billion.