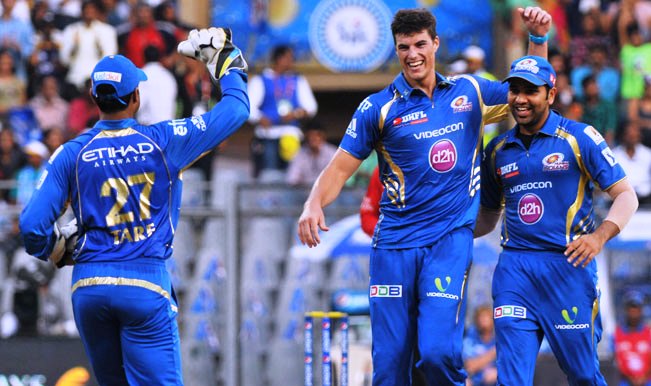 Mumbai: Their juggernaut having come to a halt against the batting might of Royal Challengers Bangalore, Mumbai Indians face a virtual make or break situation when they take on defending champions Kolkata Knight Riders in the Indian Premier League cricket on Thursday.

The loss here last Sunday to RCB, after a superb five-game winning streak, has come at the wrong time.

But MI would be seeking inspiration from their overall 10-5 win-loss record against KKR who, however, won their previous season-opening clash on April 8 by seven wickets.

MI would have loved to go into the tough battle with their tails up instead of licking their wounds inflicted by the brutal assault on their bowling attack by A B de Villiers who smashed 133 not out of just 59 balls.

Having just 12 points in their kitty with tomorrow’s last home game at the Wankhede Stadium followed by their concluding away match against Sunrisers Hyderabad on May 17 in hand, MI have very little margin of error to play with.

MI need to pull up their socks and put behind the humiliating 39-run loss to RCB in their home bastion when they take on the formidable Knight Riders who go into the game placed second on the table.

They may, however, not be entirely without a chance of making a play-off berth even if they lose against the Knight Riders, who are on a three-game winning roll. But then their progress would not be in their own hands.

On the other hand a victory would not only help the Kolkata franchise bounce back into the pole position currently occupied by the Chennai Super Kings, but would also make it 2 out of 2 in their clashes with MI this season.

MI’s bowlers were given a hiding by de Villiers and RCB skipper Virat Kohli. With Jasprit Bumrah and Hardik Pandya both having conceded over 50 runs, one of them is bound to be replaced, if not both.

R Vinay Kumar has been in and out of playing XI like the wayward Bumrah but, strangely, MI have not given a single chance to the experienced Karnataka pacer Abhimanyu Mithun so far. The only bright spot in MI’s bowling effort against RCB, on a fantastic batting strip, was by Lasith Malinga.

They would be hoping that their spin duo of Harbhajan Singh and Jagadeesha Suchith â€“ who too were punished by de Villiers and Kolhi â€“ Â come back stronger.

In batting, MI should be pleased with the consistent form shown by opener Lendl Simmons who top scored with 68 in the unsuccessful chase of the huge target of 236 against RCB after plucking a great catch to send back Chris Gayle.

Simmons’ partnership with another West Indian, Kieron Pollard (49), was another bright spot in their dismal loss on a day when their catching too let them down.

Knight Riders, on the other hand, know that a win over MI would gurantee them not only a play-off spot but also give a strong push to finish in the top two, which is what they would be aiming for.

Successive victories over Sunrisers, Delhi Daredevils and Kings XI Punjab have given the Gautam Gambhir-led team the timely momentum to take on the might of MI.

The title holders have the ideal mix of attacking top order batsmen â€“ Gambhir (288 runs from 11 games), Robin Uthappa (325 runs from 11) and Manish Pandey (203 from 11) â€“ with all-rounders Yusuf Pathan and Andre Russell to follow.

In bowling, they depend mainly on Umesh Yadav’s pace that has fetched him nine wickets in 10 games at a costly 34.33 per victim, Russell’s abilities (11 wickets from 11 games at 23.18 per wicket), as well as the slow bowling skills of Piyush Chawla (11 wickets from1 11 games), West Indian Sunil Narine and Australian Brad Hogg to stifle the batsmen in the middle overs.

Morne Morkel is around too as a good option for utilising the extra bounce that the Wankhede track offers. The gangling South African pacer has been miserly, too, giving away just over 15 runs for each of the six wickets taken in the five games he has figured in.

Notwithstanding a win or a loss tomorrow, Knight Riders are to stay on in Mumbai for their last league clash against Rajasthan Royals at the Cricket Club of India’s Brabourne Stadium on May 16.

The title holders would be much more relaxed in their outlook, considering their standing in the league table, as compared to the hosts who will be under a lot of pressure to perform or perish.