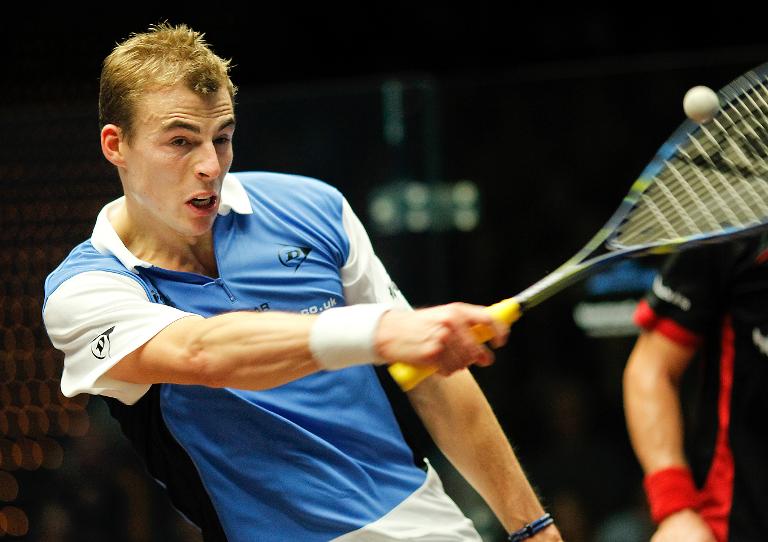 Three-time British Open champion Nick Matthew kept his record-breaking hopes alive, but had to come back from a worrying deficit to do it on Wednesday.

The 34-year-old will become the oldest British Open champion of the professional era if he wins the title a fourth time this week, but he was a game and 1-5 down against the in-form world number 26 from France, Gregoire Marche, before reaching the quarter-finals.

In the next crucial few moments Matthew found the motivation and confidence to make a push, and to move better, and after that he just kept his nose in front to squeeze out a 7-11, 11-7, 11-8, 11-7 win.

Even against an opponent ranked 24 places below him that was a creditable achievement, for Matthewâ€™s month-long ankle injury had placed his participation in doubt and significantly reduced his court coverage.

But in the 48 hours since his first round struggle against Laurens-Jan Anjema there was further healing to the injury.

“Not as much as I would have liked – but yes, my ankle was a lot better,” Matthew said.

“I was losing the first game (against Marche) because of my squash, which you can rectify, and not because of the ankle – and that encouraged me to feel that I could improve.”

Matthew also admitted that a flamboyant double fake by the Frenchman early in the second game motivated him to push harder.

When he did he discovered that not only he was able to apply more pressure but to risk play the rallies out much more than against Anjema.

Marche, given a boost by being part of his countryâ€™s European team title winning squad, may have made tactical errors during that vital second game phase when Matthew went from 1-5 to 7-5.

Although he playing with entertaining creativity he also opening up the court and allowed Matthew opportunities to pitch in with some telling front court thrusts.

Matthew won the third game with a brilliant forehand drop winner, and skilfully resisted Marcheâ€™s attempted comeback in the fourth, which carried the Frenchman from a two-point deficit to level at 6-6.

Two fine volley drops and a tight wall-clinger helped Matthew to get home, and earn another 48 hours respite before playing another Frenchman in career-best form, Mathieu Castagnet.

Castagnet got past the sixth seeded Englishman Peter Barker on Monday and now overwhelmed Marwan El Shorbagy, the former world junior champion from Egypt, who had won their last two meetings.

Meanwhile the womenâ€™s event, from which five seeds had fallen, produced yet another surprise â€“ and another from the tournamentâ€™s most surprising player so far, Delia Arnold.

The Malaysian number three, ranked outside the top 20, had already celebrated qualifying for the main draw by outplaying Alison Waters, the world number three, in straight games.

She followed it by avenging last weekâ€™s Asian Championships semi-final defeat, in which she held a match point and lost to her compatriot Annie Au.

Arnold now plays Raneem el Weleily, the world number two, who played with great control and mostly moved well in an 11-5, 11-5, 12-10 win over her fellow Egyptian, the 19-year-old Yathreb Adel.

Adel too showed much skill in reaching 6-3 and 8-6 in the third, something El Weleily criticised herself for allowing to happen.

“Iâ€™ve looked back at my results, and itâ€™s mostly the third games I have lost. I have to improve on that if I want to win the tournament.”