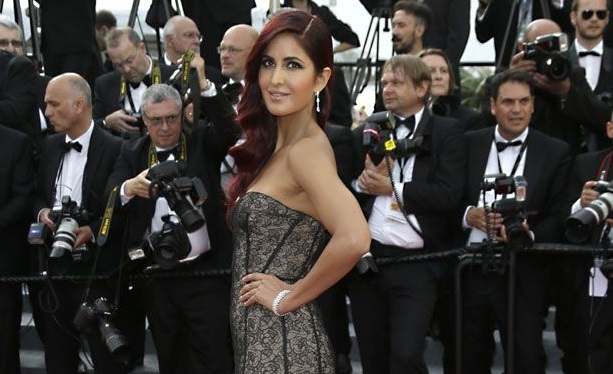 This may have been her first red carpet appearance at the festival, but she owned the carpet like a pro.

She made her first appearance at the film festival as an ambassador for L’Oreal and strutted down the Cannes carpet looking gorgeous in anÂ Oscar De La Renta Fall 2015 black dress. She wore minimal jewellery, a diamond bracelet and drop earrings that went beautifully with her fiery red hair.

The ‘Fitoor’ actress attended the premier of the film “La Tete Haute” on the opening day of 68th Cannes Film Festival. Katrina later shared the stage with Oscar winning Hollywood actress Julianne Moore and clicked a selfie with her.

The actress made her Twitter debut early this month to document her time at the film festival with pictures. Katrina gave her fans the privilege of seeing her look first, with a tweet that read: Exclusive sneak peek for my lovely fans!

Previously on day one, Katrina met the press in a black and white Milly outfit with sheer panels.

Her fellow L’OrÃ©al Paris brand ambassador Sonam Kapoor will grace the red carpet of the prestigious festival on Saturday and May 18.

Aishwarya Rai Bachchan, who has been a L’OrÃ©al Paris ambassador for more than a decade, will walk on the red carpet on May 17 and 20. The actress will complete 14 years at Cannes with L’OrÃ©al Paris.