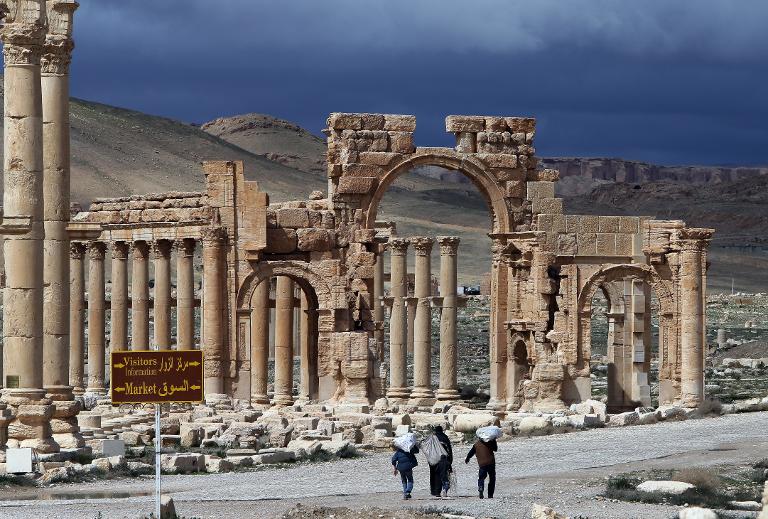 Islamic State group fighters advanced to the gates of ancient Palmyra Thursday, raising fears the Syrian world heritage site could face destruction of the kind the jihadists have already wreaked in Iraq.

As it overran nearby villages, IS executed 26 civilians — 10 of whom were beheaded — for “collaborating with the regime,” the Syrian Observatory for Human Rights said.

Irina Bokova, head of the UN’s cultural body UNESCO, called on Syrian troops and extremists to spare Palmyra, saying it “represents an irreplaceable treasure for the Syrian people, and the world.”

“Palmyra must be saved,” Bokova said at a two-day conference in Cairo on protecting the region’s archeological sites.

Syria’s head of antiquities made an appeal for international action earlier Thursday, saying IS was less than two kilometres (barely a mile) from the remains of one of the most important cultural centres of the ancient world.

The world “must mobilise before, not after, the destruction of the artefacts” at Palmyra, Mamoun Abdulkarim said in a telephone call.

“IS has not entered the city yet, and we hope these barbarians will never enter,” he said. “But if IS enters Palmyra, it will be destroyed and it will be an international catastrophe.”

The ancient city stood on a caravan route at the crossroads of several civilisations and its 1st and 2nd century temples and colonnaded streets mark a unique blend of Graeco-Roman and Persian influences.

Observatory head Rami Abdel Rahman said the city was “under threat” as fierce fighting and shelling continued on its eastern edges amid a regime counter-offensive.

The jihadist advance on the well-preserved remains came as an international conference was under way in Cairo to address destruction already wreaked by IS on the ancient sites of Nimrud and Hatra in Iraq.

Foreign affairs and antiquities officials from 11 Arab countries gathered in Egypt to condemn the jihadists’ demolition of Iraq’s heritage with sledgehammers, bulldozers and high explosives.

Abdulkarim said Syria’s antiquities officials would try to ensure the safety of artefacts found in Palmyra’s archaeological digs over the years and now housed in an adjacent museum.

“We can protect the statues and artefacts, but we cannot protect the architecture, the temples,” he said.

“IS will just destroy it from the outside.”

Abdulkarim said he had no doubt that if Palmyra fell to the jihadists, it would suffer a similar fate to ancient Nimrud, which they blew up earlier this year.

“If IS enters Palmyra, it will spell its destruction… It will be a repetition of the barbarism and savagery which we saw in Nimrud, Hatra and Mosul.”

It would not be the first time that government troops have lost control of Palmyra. Rebels held the site from February to September 2013 before the regime recaptured it.

One of the ancient city’s masterpieces, the Temple of Baal, suffered some damage during the accompanying artillery exchanges.

But those rebels did not share the fanatical devotion of IS to demolishing all of the region’s pre-Islamic heritage.

There was ferocious fighting as the jihadists overran the town of Al-Sukhnah on Wednesday in their drive across the desert towards Palmyra.

Syria’s official news agency reported that military aircraft had destroyed IS vehicles near Al-Sukhnah and that army units “killed IS terrorists” in the area.

Provincial governor Talal Barazi said that 1,800 families who had fled the advancing jihadists were being sheltered in reception centres in the nearby modern town of Tadmur.

Both sides suffered heavy losses in the battle for Al-Sukhnah, including senior commanders, the Observatory said.

Jihadist websites named him as Abu Malik Anas al-Nashwan, who appeared in an IS video showing the beheadings of 28 Ethiopian and Eritrean Christians in Libya earlier this year.