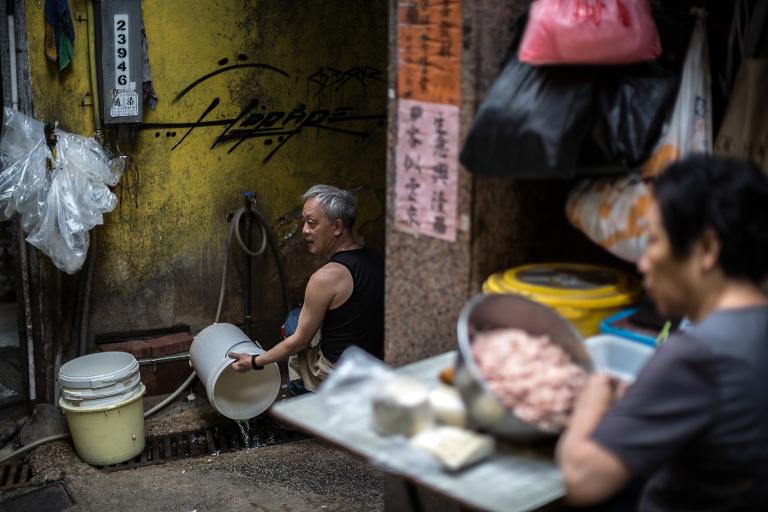 But the cheerful stalls — known as dai pai dongs in Cantonese — have dwindled to fewer than 30 in the city of seven million people, where they thrived after the Second World War before red-tape hurdles set in.

Offering the rare chance to eat outdoors, escaping the Asian financial hub’s air-conditioned high-rises, the eateries are a nostalgic throwback to Hong Kong’s past.

With no walls, cooks in the open, customers on plastic stools, melamine plates and bunches of chopsticks in tabletop jars, its a no-fuss formula that still draws customers day and night.

“I feel more comfortable sitting here in a dai pai dong. There is no restriction, I can talk about childhood or I can smoke here,” said Lau Yat-keung, 61, at a buzzing tarpaulin-covered stall in the working-class suburb of Sham Shui Po.

“There is no reason to go to those fast food chain restaurants. Young people there think you are out of date,” he added over a table of beers.

It’s simple fare that’s easy on the pocket: diners can fill up on a plate of tripe or roast goose with rice for around $5 (4.40 euros), noodles with luncheon meat and egg for just over $3, or toast from only $1.

But their hey-day is long gone.

The former government stopped issuing new licences decades ago and heavily restricted permit transfers. Owners were also paid to voluntarily give up their licences.

Facing calls for more to be done to preserve the stalls, the government targeted those in the skyscraper-encircled Central district five years ago to improve hygiene.

Services were beefed up with the laying of gas and new water pipes, electric cabling, waste water discharge pits and the road was resurfaced. Owners in turn revamped stalls that swell at lunchtime as dishes roll out of pint-sized cooking areas.

Restrictions on licence transfers, once to spouses only, were also relaxed.

“The future of dai pai dong is not optimistic” said Tsang Yau-lin in Sham Shui Po, whose black-and-white family photographs show the long history of the business first started by her father in the 1950s across the harbour.

“In the future two or three years, buildings around here will be destructed and dai pai dong will hold up the interest of some groups. So I think the dai pai dong will be relocated by the government to avoid obstructing construction.”

Home to thousands of restaurants from fancy to bare-boned, Hong Kong has 64 Michelin guide listings and some of the world’s best-known chefs have opened shop.

But at the tarmac stalls, folding tables and overhead fluorescent strips or bare bulbs are part of the ambience, where fresh razor clams may sit in a bucket on the floor before cooking as someone lights up at the next table.

But some argue the friendly outdoor dai pai dongs and their roaring woks are a unique part of the city’s history and character — and should be conserved.

Chong Yuk-sik, who wrote a book on their history, believes that the government is letting them die out.

“I think we should treasure our local culture otherwise we’re just like other cities. How to keep Hong Kong unique? I think dai pai dong is one of the ways,” she argues.

For regulars in the street stalls, the hope is that these colourful eateries will survive the march of modern Hong Kong.