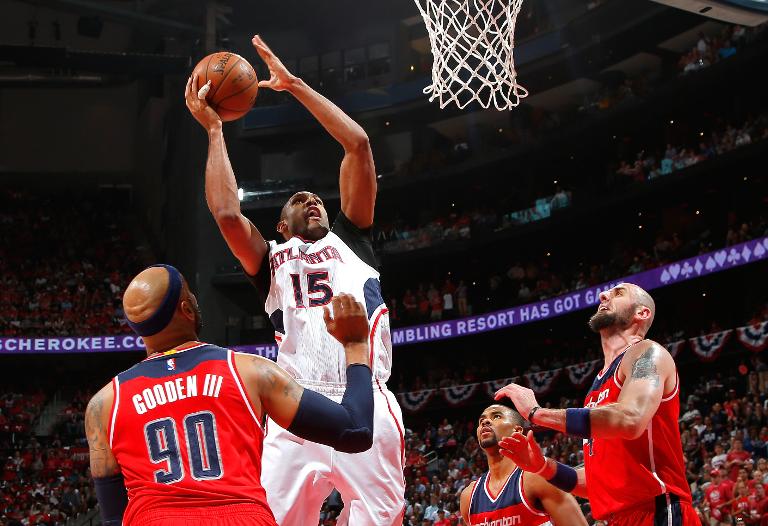 Al Horford’s putback layup with 1.9 seconds left lifted the Atlanta Hawks to an 82-81 victory over Washington and within one win of advancing in the NBA playoffs.

The Hawks, the top seeds in the Eastern Conference, now lead the best-of-seven second-round series three games to two.

The Wizards will try to stay alive when they host game six in Washington on Friday.

Western Conference top seeds Golden State also moved within one win of advancing — taking a 3-2 series lead over Memphis with a 98-78 romp in Oakland, California.

NBA Most Valuable Player Stephen Curry drained six of the Warriors’ 14 three-pointers, following up his outstanding game four performance with another stellar display that included 18 points along with seven rebounds and five assists.

Klay Thompson scored 21 points for the Warriors, who will try to wrap up the series on Friday in Memphis.

“This is big,” said Curry, whose Warriors had pulled level in the series with a game-four win. “We wanted to capitalize on the momentum we got in game four.”

It came down to the wire in Atlanta, where the Hawks and Wizards were tied with less than 30 seconds remaining.

Paul Pierce, whose buzzer-beating jump shot gave Washington a win in game three, tried to drive to the basket but saw the ball poked away by Atlanta’s Kyle Korver.

That set up a breakaway for the Hawks, with Horford and DeMarre Carroll exchanging three passes before Carroll’s layup gave Atlanta an 80-78 lead.

Pierce responded. Out of a timeout, Bradley Beal drove baseline and tossed the ball to an open Pierce who drained a three-pointer from the corner that put Washington ahead.

With the game on the line, Atlanta went to 21-year-old back-up point guard Dennis Schroder, who drove right for a layup that bounced off the backboard.

Horford timed his jump perfectly, securing the loose ball and landing before firing up the game-winner.

“A heck of a play by Al,” Atlanta coach Mike Budenholzer said. “He went and got it, found a way to put it back in.”

Wizards point guard John Wall was back in the lineup after missing three games with broken bones in his left hand and wrist.

He finished with 15 points, seven assists and four steals, but his desperation heave from halfcourt at the buzzer was off-target.

The two teams combined for 44 turnovers and 9-for-39 shooting from three-point range in the lowest scoring game so far this post-season.

“Turnovers. Turnovers,” said Wizards coach Randy Wittman. “When we were up nine, we gave them too many easy baskets off our turnovers. Let them get right back in the game.”

Budenholzer said that was partly a product of the two teams getting to know each other.

“It’s getting harder and harder,” he said. “Defense is going to the next level.”

But he was pleased that his players kept their composure when trailing late.

“We have to take the same mental focus to Washington for game six,” he said.